Generating all permutations of N elements

For small sets, the ALLPERM function returns a vector that contains all n! permutations of the elements of the set. Each row is a permutation. For example, what are all the possible arrangements of four players at a card table? (The positions around the table are traditionally labeled North, East, South, and West.) The following SAS/IML statements display all the possible arrangements of players at the four positions: 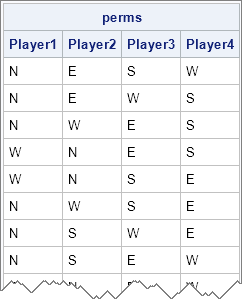 For an application that is more statistically oriented, you can use the complete list of permutations to construct an exact permutation test (see documentation for the FREQ procedure).

For example, suppose that you have a deck of 52 playing cards. You can simulate a shuffle of the deck by generating a random permutation of the 52 cards, as follows:

The previous SAS/IML statements create a 52-element character vector to represent to suit and face value of the cards. The array is then randomly permuted. The cards are then "dealt" to four players, who each receive 13 cards. Notice that enumerating all 8.06 x 1067 permutations of 52 elements is infeasible.

Besides being useful, I like the name of the RANPERK function. A "perk" (slang for perquisite) is an additional benefit given to someone, like free coffee and snacks in the break room. The thought of the SAS/IML language giving me random perks makes me smile!