In vector languages such as SAS/IML, the key to efficient simulation is often avoiding writing a loop. In SAS/IML, you can use a clever trick to ensure that your simulation is efficient: call the Base SAS RAND function instead of the SAS/IML RANDGEN routine! This may seem strange to experienced SAS/IML programmers. Why would anyone call the RAND function from within SAS/IML? Isn't it the case that the RAND function returns a single scalar value, whereas a single call to the more efficient RANDGEN call fills an entire matrix with random values?

Let's see how this works. Suppose I want to sample observations from the Bernoulli distribution with probability of success p. For the first 10 observations I want to use p=0.05. For the next 10, I want to use p=0.5. For the last 10, p=0.95. The following SAS/IML statements create a 10 x 3 matrix whose columns contain the specified probabilities. The matrix is passed to the RAND function, which returns—tah-dah!—a 10 x 3 matrix of values where each column is a sample from a Bernoulli distribution with a different parameter.

Notice that the first column of the resulting matrix is all zeros because the probability of getting a one is only 0.05. The middle column (p=0.5) is roughly half zeros and half ones, and the third column (p=0.95) is almost all ones. There are no loops required.

As a more contrived example, suppose that the probability of some event occurring has a cyclical nature. This might model, for example, the probability of buying a seasonal item such as a winter coat or a swimsuit. The following SAS/IML program create a vector of parameters that vary sinusoidally between ± 0.9. Binary outcomes are generated according to the parameter vector:

To visualize the probability and the outcomes, you can create a graph that shows the parameter values and overlays a scatter plot that shows whether each binary outcome was 0 or 1: 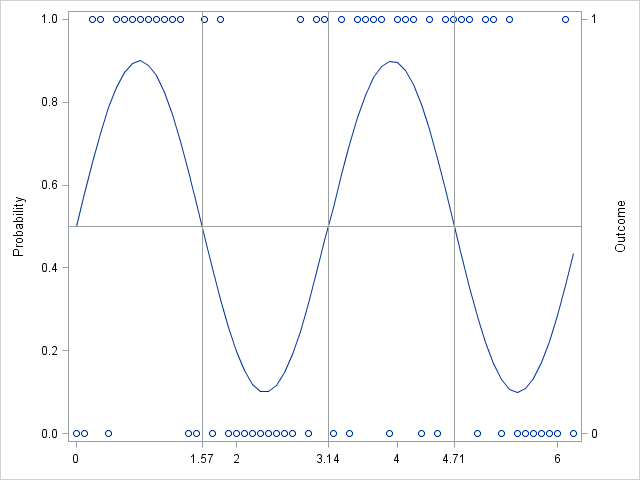 Of course, you can also generate data like these by using the DATA step. Furthermore, in SAS/IML 12.1 and beyond, the RANDGEN function supports vectors of parameters.