Gambling games that use dice, such as the game of "craps," are often used to demonstrate the laws of probability. For two dice, the possible rolls and probability of each roll are usually represented by a matrix. Consequently, the SAS/IML language makes it easy to compute the probabilities of various events.

For two fair dice, the probability of any side appearing is 1/6. Because the rolls are independent, the joint probability is computed as the product of the marginal probabilities. You can also create a matrix that summarizes the various ways that each particular number can occur: 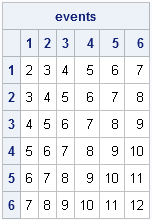 You can use the event and probs matrices to compute the probabilities of each possible sum of two dice. There are several ways to do this, but I like to use the LOC function to find the elements of the event matrix that correspond to each roll, and then add the associated probabilities:

According to the computation, the probability of winning at craps is almost—but not quite!—50%.

This exercise shows that having a matrix and vector language is useful for computing with probabilities. More importantly, however, this post sets the foundations for looking at the interesting case where the two dice are not fair. If you change the definition of dieProb (on the first line of the program) so that it is no longer a constant vector, all of the computations are still valid!

Next week I will post an article that shows how the odds change if some sides of the dice are more likely to appear than others. Feel free to conduct your own investigation of unfair dice before then.