SAS provides several ways to compute sample quantiles of data. The UNIVARIATE procedure can compute quantiles (also called percentiles), but you can also compute them in the SAS/IML language. Prior to SAS/IML 9.22 (released in 2010) statistical programmers could call a SAS/IML module that computes sample quantiles. With the release of SAS/IML 9.22, there is now a built-in QNTL call for computing sample quantiles.

The output shows that the sample quantiles of the columns are close to the theoretical quantiles for the underlying populations, as shown by the following statements:

The QNTL call supports a third parameter with which you can specify specific quantiles. For example, the following statements compute the 5th, 10th, 90th, and 95th quantiles of each column of x:

The output from the QNTL call is a matrix, q. The number of columns of q is the number of n columns of x, and each row represents a quantile. If you want to display the quantiles, it is convenient to use the CHAR function or the PUTN function to form row labels that indicate the quantiles or percentiles, as shown in the following statements: 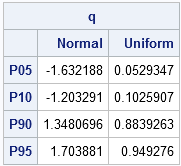 As shown in the example, the Zw.d format can be useful for converting the numerical quantiles to percentile labels.