I have previously written about how to create funnel plots in SAS software. A funnel plot is a way to compare the aggregated performance of many groups without ranking them. The groups can be states, counties, schools, hospitals, doctors, airlines, and so forth. A funnel plot graphs a performance metric versus a measure of uncertainty (often the size of each sample) and overlays "control limits" that enable you to assess whether extreme values are "unusual" or whether they fall within the realm of statistical variation.

When the performance metric is normally distributed, the funnel chart is similar to the analysis of means plot. However, you can also create funnel charts for quantities such as rates, proportions, and ratios of proportions. All of these variations are discussed in Spiegelhalter's 2005 paper on funnel plots.

This article describes how to construct a funnel plot for proportions in SAS. Spiegelhalter lays out four steps for creating the funnel plot of the proportion of cases that satisfy some condition for multiple groups (see Appendix A.1.1):

Step 3 is very interesting. However, this post does not discuss the details of Step 3.

The proportion of children placed into adoption within 12 months

A recent post on Spiegelhalter's blog gives data and produces a funnel plot for the proportion of children that are placed with adoptive parents within 12 months. The data is aggregated for various regions in England, which are called "local authorities." (You can download the data in a CSV file.) To give you some idea of the data, one authority (Kent) placed 162 out of 235 children (69%) with adoptive parents within 12 months. Another (Chesire East) handled only 15 cases and placed 10 of the children (67%).

A funnel plot (shown below) is a way to compare the proportion of children that are placed within 12 months for each of 143 regions. The horizontal line shows the nationwide proportion of children that are placed within 12 months. The funnel-shaped curves are the 95% and 99.8% quantile curves under the assumption that proportions are sampled from a binomial distribution for which the probability of "success" (placing a child) equals the national average. Because a statistic computed on a small sample has larger variability that the same statistic computed on a large sample, the two funnel-shaped curves for these data are wide to the left and narrow to the right. 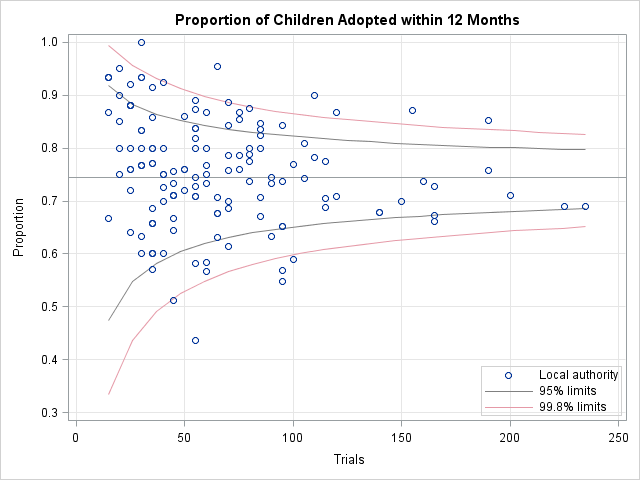 You can download the SAS program that creates the funnel plot. The remainder of this post describes each of the four main steps that are used to construct the plot.

Compute the proportion for each category

The following statements read the data into SAS/IML vectors and compute the proportion of children that were placed:

If you want to compute the control limits for each local authority (for example, to flag those that are outside of the 99.8 control limits), you can set n = Trials instead of using evenly spaced values of n.

There are now three data sets: the original data, the observed and expected proportions, and the control limits. The first and second data sets can be merged, but the third has a different number of observations. The following DATA steps combine the data into a single data set. The SGPLOT procedure then creates the funnel plot.

If desired, you can use the technique that I described in a previous post to label the observations that are beyond the control limits.