For years I've been making presentations about SAS/IML software at conferences. Since 2008, I've always mentioned to SAS customers that they can call R from within SAS/IML software. (This feature was introduced in SAS/IML Studio 3.2 and was added to the IML procedure in SAS/IML 9.22.) I also included a chapter on calling R in my book, Statistical Programming with SAS/IML Software.

However, I've never blogged about it until today. Why? Frankly, I don't usually have a reason to call R from SAS/IML software. Both R and SAS/IML are high-level languages with a rich run-time library of functions. They both enable you to extend the language by writing and sharing user-defined functions. They both enable you to use matrix computations to compactly represent and solve statistical problems and to analyze data. I use SAS/IML software for all of my day-to-day computational needs.

However, sometimes I hear about a technique that someone has implemented in R and I want to try that technique too. If I'm going to use the technique many times, I'll consider implementing it myself in the SAS/IML language. However, if I'm only going to use it once (or I'm not sure how often I'll use it), I'll save myself time and call R.

Earlier this week, I showed some plots of airline routes that a colleague created in SAS, which are based on similar plots (created in R) that appeared on the Flowing Data blog. In my blog post I said:

I don't have the time right now to implement a great circle algorithm in SAS/IML. ... I could also generate the great arcs by using the same R package that Flowing Data uses.

Basically, I was being lazy. However, after Flowing Data posted the R code to plot great arcs, I no longer had an excuse not to use great arcs. This is a situation in which calling R will save me time: I want to compute arcs of great circles, I don't know of a comparable function already written in SAS, and I'll rarely use this functionality in the future. So, I wrote a short SAS/IML program that calls an R function to compute the arcs.

Read on if you want to learn about how to call R from SAS. If you just want to see the final result, here it is: 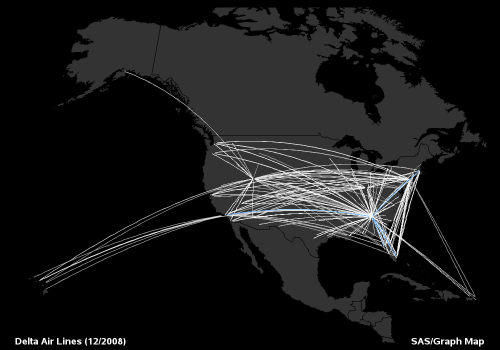 How to Call R from a SAS/IML Program

To call R, install R 2.11 or earlier1 on the same computer that runs SAS and install the R package that contains the function you want. The function that I want to call is the gcIntermediate function in the geosphere package, so I installed the package as described on the Flowing Data blog.

I'll discuss each step in turn.

For ease of presentation, assume that there is a data set called DeltaFlights that contains airline routes for Delta airlines. (The general case of multiple airlines is handled similarly.) The data contains the following variables:

Because I like to work in the SAS/IML environment, I'll choose the second option. The following statements read the data into SAS/IML vectors or matrices:

The matrices mOrig and mDest contain 376 rows and two columns. The following statements transfer data from the two matrices into R matrices of the same dimensions:

The result is two R matrices named orig and dest. Each row of orig and each row of dest contains the longitude and latitude of an airport. (The statements also start R if it is not already running.)

The call to R is straightforward:

The resulting R object, named dist, is a list of 376 matrices. Each matrix has 50 rows and two columns. The ith matrix represents the longitude and latitude of 50 points along a great arc that connects the ith row of orig and the ith row of dest.

You can use the ImportMatrixFromR subroutine to copy the data from dist into a SAS/IML matrix named distance:

Step 4: Use the Results in SAS

These results are intended to be overlaid on a map. To visualize the flight paths in SAS/IML Studio, I can use the following IMLPlus statements, which are similar to the mapping examples in my 2008 SAS Global Forum Paper: 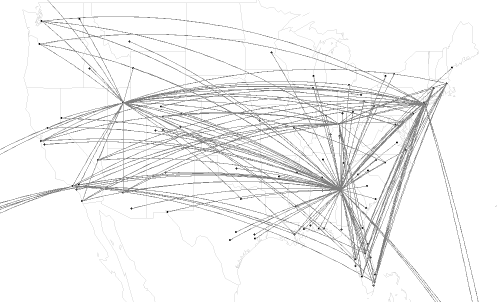 However, this particular computation was for my colleague, Robert Allison, who uses SAS/GRAPH software to visualize the flight paths. Therefore, I wrote the arcs to a SAS data set and let him use PROC GMAP with the ANNOTATE= option to create the image seen earlier in this article.

1. As I've said elsewhere, R changed its directory structure between versions 2.11 and 2.12. Consequently, SAS 9.22 (which shipped before R 2.12 was released) looks for certain DLLs in directories that no longer exist. The workaround is to use R 2.11 with SAS 9.22. This workaround is not required for SAS 9.3.