The other day I was at the grocery store buying a week's worth of groceries. When the cashier, Kurt (not his real name), totaled my bill, he announced, "That'll be ninety-six dollars, even."

"Even?" I asked incredulously. "You mean no cents?"

"Wow," I said, with a sly statistical grin appearing on my face, "I'll bet that only happens once in a hundred customers!"

Kurt shrugged, disinterested. As I left, I congratulated myself on my subtle humor, which clearly had not amused my cashier. "Get it?" I thought to myself, "One chance in a hundred? The possibilities are 00 through 99 cents."

But as I drove home, I began to wonder: maybe Kurt knows more about grocery bills than I do. I quickly calculated that if Kurt works eight-hour shifts, he probably processes about 100 transactions every day. Does he see one whole-dollar amount every shift, on average? I thought back to my weekly visits to the grocery store over the past two years. I didn't recall another whole-dollar amount.

So what is the probability that this event (a grocery bill that is exactly a multiple of a dollar) happens? Is it really a one-chance-in-a-hundred event, or is it rarer?

The Distribution of Prices for Grocery Items

I almost got into an accident when the next thought popped into my head: grocery prices are not uniformly distributed!

I rushed home and left the milk to spoil on the counter while I hunted for old grocery bills. I found three and set about analyzing the distribution of prices for items that I buy at my grocery store. (If you'd like to do your own analysis, you can download the SAS DATA step program .)

First, I used SAS/IML Studio to create a histogram of the last two digits (the cents) for items I bought. As expected, the distribution is not uniform. More than 20% of the items have 99 cents as part of the price. Almost 10% were "dollar specials." 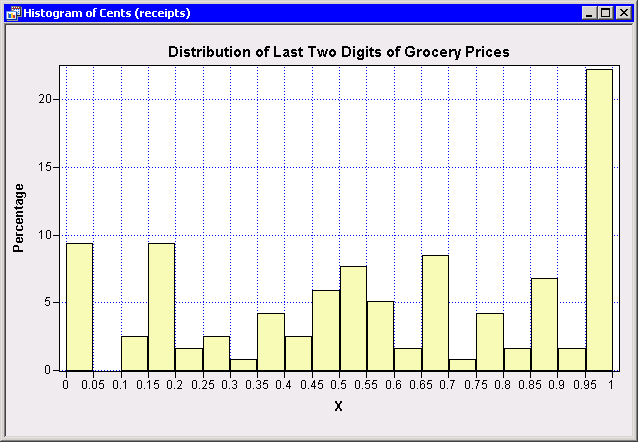 Frequent values for the last two digits are shown in the following PROC FREQ output:

The distribution of digits would be even more skewed except for the fact that I buy a lot of vegetables, which are priced by the pound.

Next I wondered whether sales tax affects the chances that my grocery bill is an whole-dollar amount. A sales tax of S results in a total bill that is higher than the cost of the individual items:

Sales tax is good—if your goal is to get a "magic number" (that is, an whole-dollar amount) on your total grocery bill. Why? Sales tax increases the chances of getting a magic number. Look at it this way: if there is no sales tax, then the total cost of my groceries is a whole-dollar amount when the total cost of the items is $1.00, $2.00, $3.00, and so on. There is exactly $1 between each magic number. However, in Wake County, NC, we have a 7.75% sales tax. My post-tax total will be a whole-dollar amount if the total pre-tax cost of my groceries is $0.93, $1.86, $2.78, $3.71, and so on. These pre-tax numbers are only 92 or 93 cents apart and therefore happen more frequently than if there were no sales tax. With sales tax rates at a record high in the US, I wonder if other shoppers are seeing more whole-dollar grocery bills?

This suggests that my chances might not be one in 100, but might be as high as one in 93—assuming that the last digits of my pre-tax costs are uniformly distributed. But are they? There is still the nagging fact that grocery items tend to be priced non-uniformly at values such as $1.99 and $1.49.

There is a computational way to estimate the odds: I can resample from the data and simulate a bunch of grocery bills to estimate how often the post-tax bill is a whole-dollar amount. Since this post is getting a little long, I'll report the results of the simulation next week. If you are impatient, why not try it yourself?

Here is a link to the follow-up article that uses bootstrapping to estimate the probability.