Some matrices are so special that they have names. The identity matrix is the most famous, but many are named after a researcher who studied them such as the Hadamard, Hilbert, Sylvester, Toeplitz, and Vandermonde matrices. This article is about the Pascal matrix, which is formed by using elements from Pascal's triangle.

Interestingly, these two matrices are intimately connected. I have previously discussed that the full matrix (which is symmetric) has a Cholesky factorization, and that factorization is precisely P = L Lt. That's pretty cool!

Why Cholesky factorization is important

I've written about the geometry of the Cholesky transformation and how it correlates and uncorrelates variables in statistical applications. But from the perspective of numerical linear algebra, matrix factorizations are useful because they enable us to solve certain problems efficiently. For example, if you have a symmetric matrix, P, then the Cholesky root enables you to solve the linear system P*v = b by solving two linear systems:

As the output shows, the two different ways to solve the problem give similar solutions. In fact, when you call the SOLVE function, it internally performs a decomposition and solves two triangular systems, so the two perform similar computations, although the SOLVE method does not exploit the symmetry of the Pascal matrix.

An explicit inverse for the Pascal matrix 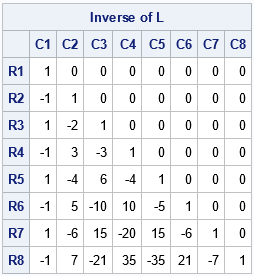 The matrix was shown earlier. You can directly solve the system P v = b by using the inverse of the Cholesky roots and two well-known results from linear algebra:

Putting these results together gives a direct method to solve a linear system that involves a Pascal matrix, as follows:

The solution vector is identical to the solutions from other methods. However, having an explicit formula for the inverse means that you can solve a linear system that involves a Pascal matrix without performing any numerical linear algebra. For a Pascal matrix (of the second kind) You can construct the Cholesky roots without doing any linear algebra because the roots are the Pascal matrix of the first kind. Furthermore, you can explicitly construct the inverse of the Cholesky roots without doing any linear algebra. Put these facts together and you can solve linear systems that involve Pascal matrices by using only matrix multiplication.

You might never need to solve a system of linear equations that involves a Pascal matrix, but there are some general principles that statistical programmers can learn from this article: