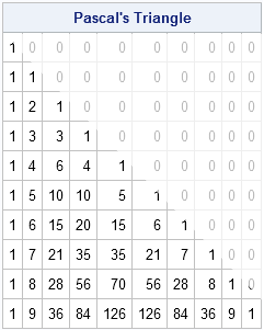 Pascal's triangle is the name given to the triangular array of binomial coefficients. The nth row is the set of coefficients in the expansion of the binomial expression (1 + x)n. Complicated stuff, right?

Well, yes and no. Pascal's triangle is known to many school children who have never heard of polynomials or coefficients because there is a fun way to construct it by using simple addition. You start by writing down the number 1. The second line is the sum of the first line and the result of shifting the first line one column to the right. This process continues: to form a new row of the triangle, add the previous row to a right-shifted copy of the previous row. To make the bookkeeping work out, you pretend that missing items are zero, as shown by the ghostly images of zeros in the image at the top of this article.

In math terms, you can find the kth element of the nth row, by adding the (k–1)th and the kth elements of the previous row. This geometric construction is a result of the following recursive relationship between binomial coefficients:

Recently several participants on the SAS/IML Support Community posted programs that created Pascal's triangle by using the COMB function in SAS software. This article shows how to create Pascal's triangle and how self-similar (fractal) patterns arise when you visualize the triangle in certain ways.

Creating an array of binomial coefficients

The resulting matrix is similar to the image at the top of this post, with the upper triangular elements equal to zero. Notice that the SAS/IML language enables you to pass in a vector argument to a Base SAS function. In this case, a vector (0:k-1) is passed to the COMB function and the resulting row vector overwrites some of the zeros in the matrix m.

You can also create Pascal's matrix by using the "schoolchild method" of adding adjacent elements from the previous row to create the new row. The construction is similar to the way that you can construct cellular automata. The following SAS/IML module constructs Pascal's triangle by using addition; no need to call the COMB function!

At first glance, the numbers in Pascal triangle have a simple structure. The edges of the triangle are all 1. The interior values increase geometrically, reaching their maximum values in the middle of the final row. However, if you label each value according to whether it is odd or even, a surprising pattern reveals itself! 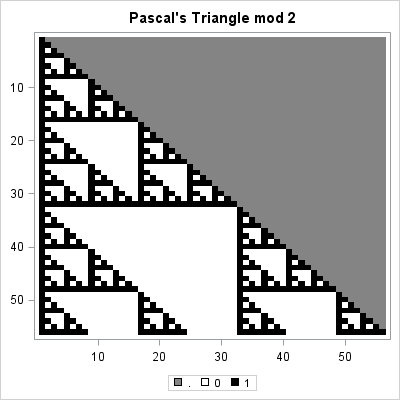 The resulting heat map bears a striking resemblance to the fractal known as Sierpinski's triangle. This fact is not widely known, but the image is comprehensible to school-age children. However, few children have the patience and stamina to color hundreds of cells, so using software to color the triangle is definitely recommended!

The fascinating self-similar pattern might inspire you to wonder what happens if the elements are colored according to some other scheme. For example, what is the pattern if you divide the elements of Pascal's triangle by 3 and visualize the remainders? Or division by 4? Or 5? The following loop creates three heat maps that visualize the numbers in Pascal's triangle modulo k, where k = 3, 4, and 5. 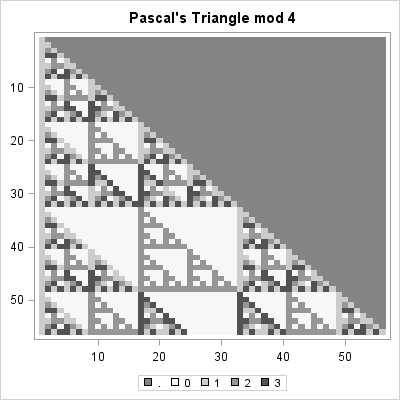 The "mod 4" result is shown. The other heat maps are similar. Each shows a self-similar pattern. One of the surprising results of chaos theory and fractals is that these complicated self-similar structures can arise from simple iterative arithmetic operations (adding adjacent elements) followed by a modular operation.

The astute reader will have noticed that 56 rows is a curious number. Why not 64 rows? Or 100? The answer is that the modular operations require that the numbers in Pascal's triangle be exactly representable as an integer. Although you can compute more than 1,000 rows of Pascal's triangle in double precision, at some point the numbers grow so large that they can no longer be represented exactly with an 8-byte integer.

You can use the SAS CONSTANT function to find the largest integer, B, such that smaller integers (in magnitude) are exactly represented by an 8-byte numeric value. It turns out that the largest value in a Pascal triangle with k rows is "k choose floor(k/2)," and this value exceeds B when k=57, as shown by the following statements. Thus the modulo operations will become inaccurate for k>56. 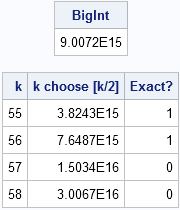