Moments of a discrete probability distribution

Let X be a discrete random variable with density function f. We assume that X has a well-defined mean, variance, skewness, and kurtosis.

The mean value of X is the first moment of f. The mean is computed as a weighted average of the density values: μ = Σi xi f(xi),
where the sum is over all possible values of X.

The variance, skewness, and kurtosis of a probability distribution are all central moments. They are also defined as weighted sums where the weights are powers of the deviation from the mean. For example, the variance of any discrete distribution is the second central moment: σ2 = Σi (xi – μ)2 f(xi). 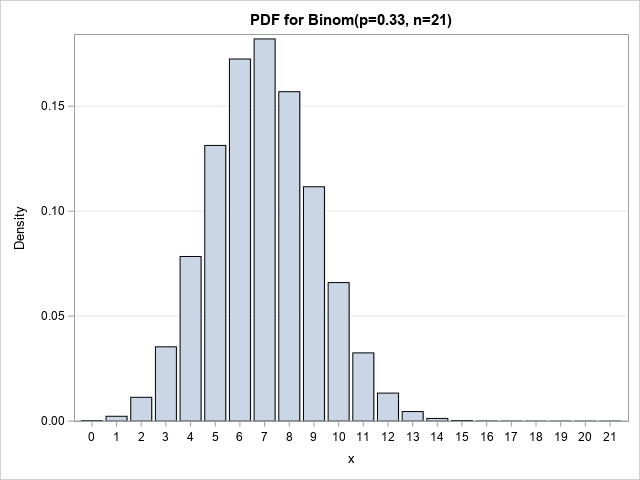 Let's see how to compute the mean and the variance by using SAS. To demonstrate, let's use the binomial distribution with parameters p=0.33 and n=21. That is, X ~ Binom(p, n) gives the number of successes in n=21 independent trials where the probability of success is p=0.33 for each trial. For these parameters, X can take values in the range {0,1,2,...,21}. A graph of the density function is shown to the right;

The mean and variance of the binomial distribution are known to be μ = np and σ2 = np(1-p), respectively, so we can check that our computations are correct.

You can use the SAS DATA step to compute these quantities, but I will demonstrate the formulas by using the IML procedure:

In this example, the range of the discrete random variable is finite, so it is easy to sum over all possible values of X. If X can take on infinitely many values, the computation becomes more complicated. Examples of distributions that have an infinite domain for the density include the geometric distribution and the Poison distribution. For distributions like these, the density must decrease geometrically, so there is some large number N such that for |X|>N the probability in the tails of the distribution is negligible. This reduces the computation to a finite sum.

The definition of the median of a discrete distribution

The Wikipedia article states that the median is either FLOOR(n p) or CEIL(n p) and discusses special cases for which the median is ROUND(n p). However, there is no simple formula that works for all cases.

The article shows how to compute these quantities in SAS by using SAS/IML software. I leave the DATA step computation for an exercise.