The following discrete probability distributions are usually presented in an introductory statistics course. They describe how likely it is to observe one or more events when you run one or more trials. In the following, X is a random variable and p is the probability of success in one Bernoulli trial.

Simulation in the SAS DATA step

What happens if you use p=0 for these five distributions? The result might depend on the software you use. The following SAS DATA shows what happens in SAS:

Because the geometric and negative binomial distributions are not defined when p=0, SAS probability routines will note the error and return a missing value, as shown by printing the output data: 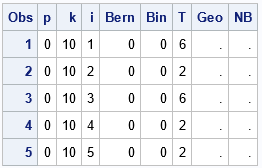 Notice that the Bernoulli and binomial variables are well-defined. Every Bernoulli trial results in X=0, which means that the sum of arbitrarily many trials is also 0. The Table distribution will return only the categories for which the probabilities are nonzero. However, the geometric and negative binomial values are assigned missing values.

Eliminate the notes during a simulation

If you are running a large simulation in which p=0 is a valid possibility, the log will contain many notes. Eventually, SAS will print the following note:

In general, it is a bad idea to suppress notes because there might be additional notes later in the program that you need to see. A better approach is to get rid of all the notes that are telling you that p=0 is an invalid argument. You can do that by using IF-THEN logic to trap the cases where p is very small. For those cases, you can manually assign a missing value. SAS will not issue a note in this case because all calls to SAS functions have valid arguments. This technique is shown in the following DATA step program: 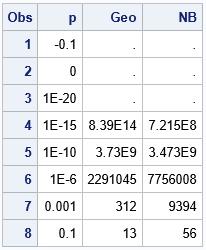 This article discusses how to handle extremely small probabilities in functions that compute probability distributions. The trick is to use IF-THEN logic to prevent the invalid probability from being used as an argument to the RAND function (or other probability functions, such as the PDF, CDF, or QUANTILE functions).

Although this article discusses zero probabilities, this situation is actually a specific case of a larger programming issue: how to prevent notes from appearing in the SAS log when a parameter to a function is invalid. Thus, you can think of this article as yet another example of how to use the "trap and cap" method of defensive programming.