Interestingly, not all games are transitive. The game "Rock, Paper, Scissors," is an intransitive game. In this game, Rock beats Scissors, Scissors beats Paper, and Paper beats Rock. You cannot rank the game shapes. You cannot declare that one shape wins more often than another.

In "Rock, Paper, Scissors," both players display their shapes simultaneously. If not, the second player could win 100% of the time by knowing the shape that is shown by the first player.

Recently, I saw an intransitive game that involves special six-sided dice. In this game, there are four dice: A, B, C, and D. Two players each choose a die and roll it. The higher number wins. If the players choose their die sequentially, the second player is at a huge advantage: No matter which die the first player chooses, the second player can choose a die such that his probability of winning the game is 2/3.

The probability of winning for pairs that involve die B are easy to compute because that die has a 3 on every face. By inspection, die A will win against B whenever A shows a 4, which occurs 2/3 of the time. Similarly, die B wins against die C whenever C shows a 2, which is 2/3 of the time. 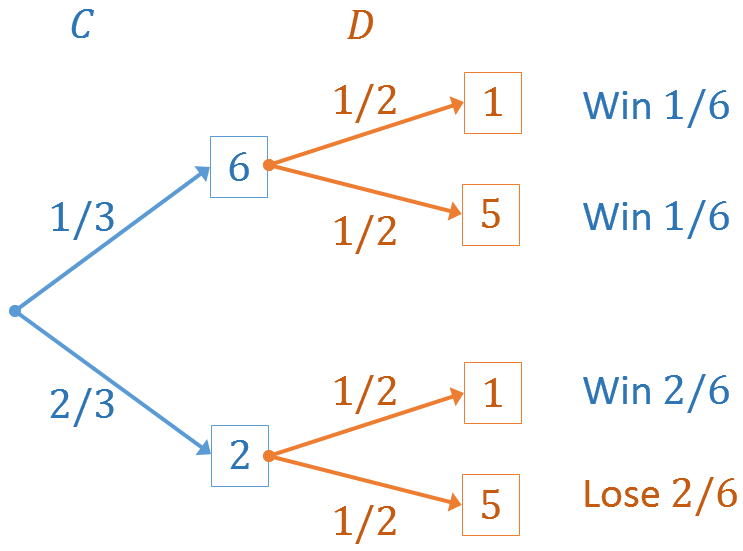 You can construct a similar diagram for the D versus A game. It is also interesting to compute the probability of A versus C and B versus D for these dice.

Because conditional probability can be tricky, I always like to check my computations by running a simulation. The following SAS/IML program uses the SAMPLE function to simulate 10,000 rolls of each die. The estimated probability for winning is the number of times that one die showed the greater number, divided by 10,000, which is the total number of simulated games. For each of the four games considered, the estimated probability is approximately 2/3.

There are other examples of intransitive dice. The ones in this article are called "Efron's Dice" because they were discovered by Brad Efron in 1970. Yes, the same Brad Efron who also invented bootstrap resampling methods! The following articles provide more examples and more explanation.