You can represent every number as a nearby integer plus a decimal. For example, 1.3 = 1 + 0.3. The integer is called the integer part of x, whereas the decimal is called the fractional part of x (or sometimes the decimal part of x). This representation is not unique. For example, you can also write 1.3 = 2 + (-0.7). There are several ways to produce the integer part of a number, depending on whether you want to round up, round down, round towards zero, or use some alternative rounding method.

In applications, two common representations are as follows:

Here is an interesting fact: for the second method (INT), you can compute the fractional part directly by using the MOD function in SAS. In SAS, the expression MOD(x,1) returns the signed fractional part of a number because the MOD function in SAS returns a result that has the same sign as x. This can be useful when you are interested only in the fraction portion of a number.

The following DATA step implements both common methods for representing a number as an integer and a fractional part. Notice the use of the MOD function for the second method: 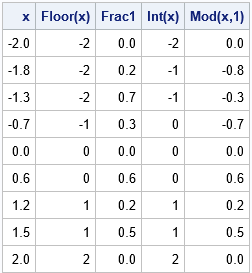 The table shows values for a few positive and negative values of x. The second and third columns represent the number as x = Floor(x) + Frac1. The fourth and fifth columns represent the number as x = Int(x) + Mod(x,1). For non-negative values of x, the two methods are equivalent. When x can be either positive or negative, I often find that the second representation is easier to work with.