I often use axis tables in PROC SGPLOT in SAS to add a table of text to a graph so that the table values are aligned with the data. But axis tables are not the only way to display tabular data in a graph. You can also use the TEXT statement, which supports many features that are not available in axis tables, such as rotating the text. Recently I saw some graphs by Bull, et al. (Fig 3, Nature, 2019) in which a table was presented in an interesting way. Part of the graph is reproduced at the right.

The complete graph includes ages from 18 to 45 years old, so there are many horizontal categories and they are very close together. For each age, the graph shows the mean luteal-phase length for women in a study about menstrual cycles. (The luteal-phase length is the number of days between ovulation and menstruation.) The numbers indicate the number of women (first number) and the number of menstrual cycles (second number) from which the mean is calculated. The vertical bars are a 95% confidence interval (CI) for the mean.

This article uses the SGPLOT procedure in SAS to create three graphs that are similar to this one:

The authors did not make the data publicly available, so I estimated values from the chart to create some similar-looking data. I did not want to type in the means and CIs for all 28 age groups, so I stopped at Age=26. 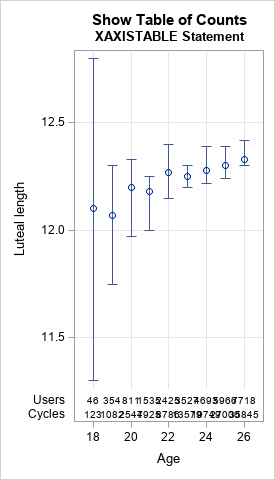 For graphs like this, the XAXISTABLE statement should usually be the first statement you try because it is so simple to use. In the XAXISTABLE statement, you list each variable that you want to display (Users and Cycles) and specify the variable for the horizontal positions (Age). The result is shown above. You can see that for these data, the cells in the axis table overlap each other and are unreadable because the distance between groups is so small.

Clearly, this first attempt does not work for this table. And because this table is intended to fit on one slide or piece of paper, you cannot simply make the graph wider to prevent the overlap. Instead, an alternative approach is required.

The authors chose to display the Users and Cycles data above each age group by using rotated text. To do this in SAS, you need to add two new variables to the data set. The first is a character variable that contains the comma-separated values of Users and Cycles. The second is the location for the text, in data coordinates. The following DATA step uses the CATX function to concatenate the data values into a comma-separated string. The height of the text string is set to 13 for all groups in this example, but you could make the height depend on the value of the mean if you prefer. 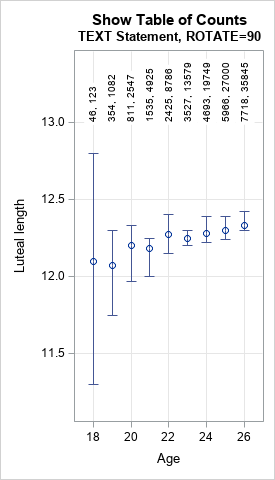 There is another option, which is to rotate the entire graph. Rather than specify Age as the horizontal variable and using vertical bars for the CIs, you can specify Age as the vertical variable and use horizontal bars. This results in a graphic that will be long rather than wide. There should be enough horizontal space to include two columns of text that show the data for Users and Cycles. Because a printed page (in portrait mode) is longer than it is wide, the graph will probably fit on a standard sheet of paper. However, it might not fit on a slide, which is wider than it is tall.

The following call to PROC SGPLOT creates a rotated version of the graph. In addition to rotating the graph, I add alternating bands of gray so that the reader can more easily associate intervals with age groups. 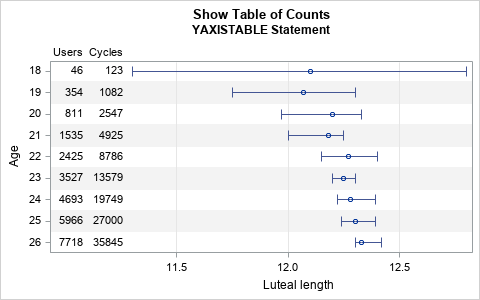 By rotating the graph, the table of numbers is easier to read. The graph for the full data will be somewhat long, but that is not usually a problem for the printed page or for HTML. The main drawback is that long graphs might not fit on a slide for a presentation. A second drawback is that the authors wanted to show that the luteal-phase length depends on age, and it is traditional to plot independent variables (age) horizontally and dependent variables (luteal length) vertically.

In summary, this article shows three ways to add tabular data to a scatter plot with error bars. The first way is to use the XAXISTABLE statement, which works when the table entries are not too wide relative to the horizontal spacing between groups. The second way is to rotate the text, as done in the Nature article. The third way is to rotate the plot so that the error bars are shown horizontally rather than vertically. This third presentation is further enhanced by adding alternating bands of color to help the reader distinguish the age categories. (You can use alternating color bands for the XAXISTABLE, too.)