I previously discussed how you can use validation data to choose between a set of competing regression models. In that article, I manually evaluated seven models for a continuous response on the training data and manually chose the model that gave the best predictions for the validation data. Fortunately, SAS software provides ways to automate this process! This article describes how PROC GLMSELECT builds models on training data and uses validation data to choose a final model. The animated GIF to the right visualizes the sequence of models that are built.

How to run PROC GLMSELECT

The GLMSELECT procedure in SAS/STAT is a workhorse procedure that implements many variable-selection methods, including least angle regression (LAR), LASSO, and elastic nets. Even though PROC GLMSELECT was introduced in SAS 9.1 (Cohen, 2006), many of its options remain relatively unknown to many SAS data analysts.

Some statisticians argue against automated model building and selection. Both Cohen (2006) and the PROC GLMSELECT documentation contain a discussion of the dangers and controversies regarding automated model building. Nevertheless, machine learning techniques routinely use this sort of process to build accurate predictive models from among hundreds of variables (or features, as they are known in the ML community).

The analysis uses the following options:

The chosen model is a cubic polynomial. The parameter estimates (below) are very close to the parameter values that are used to simulate the cubic data, so the procedure "discovered" the correct model. 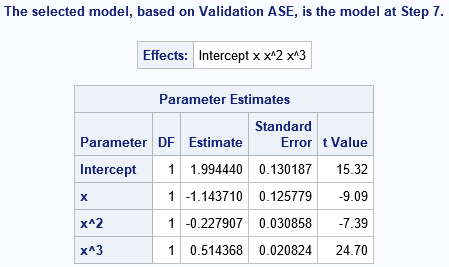 How PROC GLMSELECT constructs the models 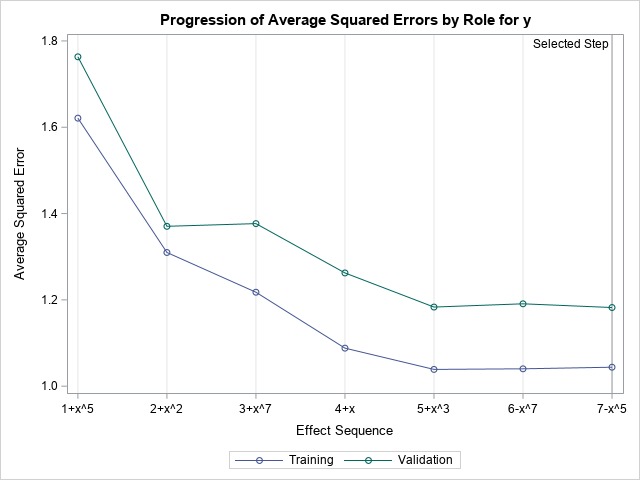 How did PROC GLMSELECT obtain that model? The output of the DETAILS=STEPS option shows that the GLMSELECT procedure built eight models. It then used the validation data to decide that the four-parameter cubic model was the model that best balances parsimony (simple versus complex models) and prediction accuracy (underfitting versus overfitting). I won't display all the output, but you can summarize the details by using the ASE plot and the Coefficients plot.

If you prefer a table, the SelectionSummary table summarizes the models that are built. The columns labeled ASE and Validation ASE contain the precise values in the ASE plot. 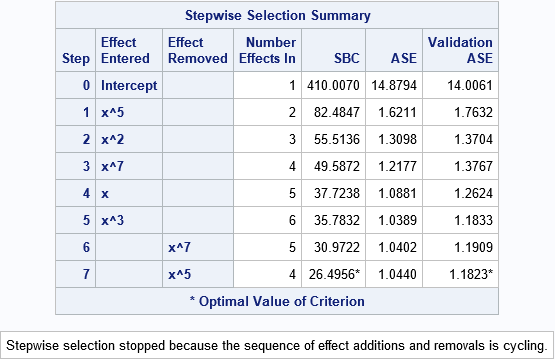 How PROC GLMSELECT defines the models 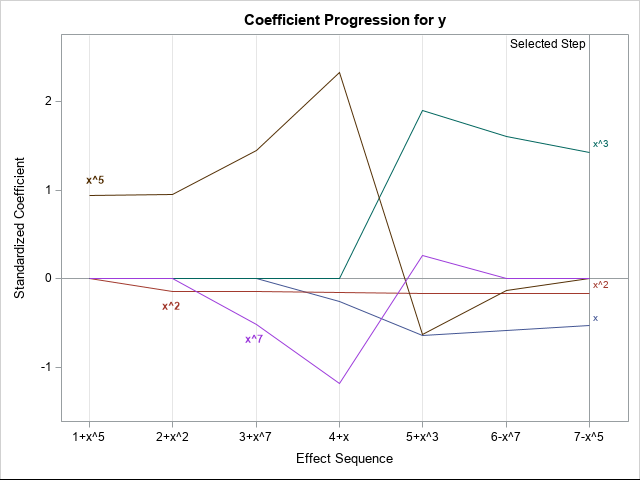 The models are least squares estimates for the included effects on the training data. The DETAILS=STEPS option displays the parameter estimates for each model. For these models, which are all polynomial effects for a single continuous variable, you can graph the eight models and overlay the fitted curves on the data. You can do this in eight separate plots or you can use PROC SGPLOT in SAS to create an animated gif that animates the sequence of models. The animation is shown at the top of this article.

In general, you can't visualize models with many effects, but the Coefficients plot displays the values of the estimates for each model. The plot (shown to the right; click to enlarge) labels only the effects in the final model, but I have manually added labels for the x^5 and x^7 effects to help explain the plot.

This article shows how to use PROC GLMSELECT in SAS to build a sequence of models for a continuous response on training data. From among the models, a final model is chosen that best predicts a validation data set. The example uses the stepwise selection technique because it is easy to understand, but the GLMSELECT procedure supports other model selection algorithms.

For more information about the model selection procedures in SAS, see the SAS/STAT documentation or the following articles: