The best way to spread Christmas cheer
is singing loud for all to hear!
-Buddy in Elf


In the Christmas movie Elf (2003), Jovie (played by Zooey Deschanel) must "spread Christmas cheer" to help Santa. She chooses to sing "Santa Claus is coming to town," and soon all of New York City is singing along.

The best sing-along songs are short and have lyrics that repeat. Jovie's choice, "Santa Claus is coming to town," satisfies both criteria. The musical structure of the song is simple:

There is a fun way to visualize repetition in song lyrics. For a song that has N words, you can define the repetition matrix to be the N x N matrix where the (i,j)th cell has the value 1 if the i_th word is the same as the j_th word. Otherwise, the (i,j)th cell equals 0. You can visualize the matrix by using a two-color heat map. Colin Morris has a web site devoted to these visualizations.

The following image visualizes the lyrics of "Santa Claus is coming to town." I have added some vertical and horizontal lines to divide the lyrics into seven sections: the verses (V1 and V2), the tag line (S), and the bridge (B). 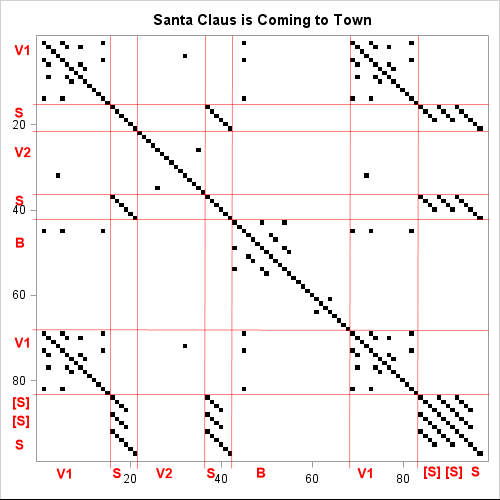 The image shows the structure of the repetition in the song lyrics:

Now that you understand what a repetition matrix looks like and how to interpret it, let's visualize a few other classic Christmas songs that contain repetitive lyrics! To help "spread Christmas cheer," I'll use shades of red and green to visualize the lyrics, rather than the boring white and black colors.

The Twelve Days of Christmas

If you make a list of Christmas songs that have repetition, chances are "The Twelve Days of Christmas" will be at the top of the list. The song is formulaic: each new verse adds a few new words before repeating the words from the previous verse. As a result, the repetition matrix is almost boring in its regularity. Here is the visualization of the classic song (click to enlarge): 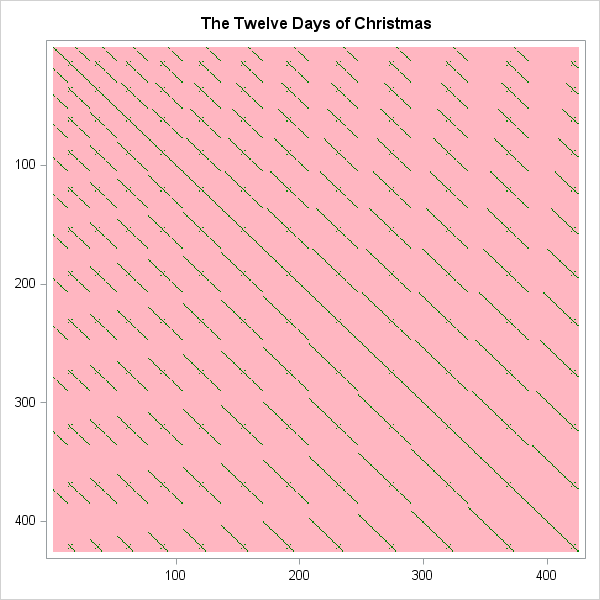 Another highly repetitive Christmas song is "The Little Drummer Boy," which features an onomatopoeic phrase (Pa rum pum pum pum) that alternates with the other lyrics. A visualization of the classic song is shown below: 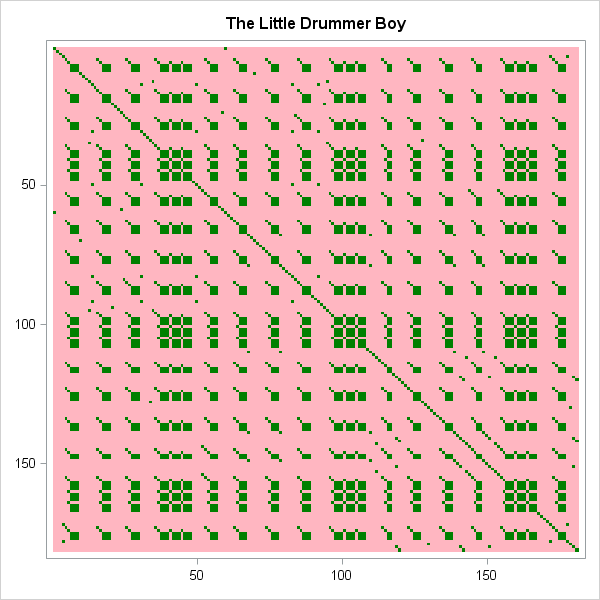 In addition to repeating the title, "Silver Bells" repeats several phrases. Most notably, the phrase "Soon it will be Christmas Day" is repeated multiple times at the end of the song. Because only certain phrases are repeated, the visualization has a pleasing structure that complements the song's lyrical qualities: 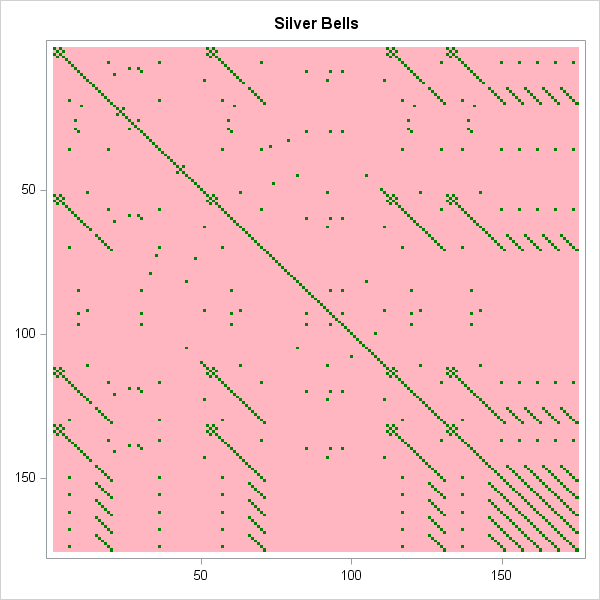 To contrast the hustle, bustle, and commercialism of Christmas, I enjoy hearing songs that are musically simple. One of my favorites is "Silent Night." Each verse is distinct, yet each begins with "Silent night, holy night!" and ends by repeating a phrase. The resulting visualization is devoid of clutter. It is visually empty and matches the lyrical imagery, "all is calm, all is bright." 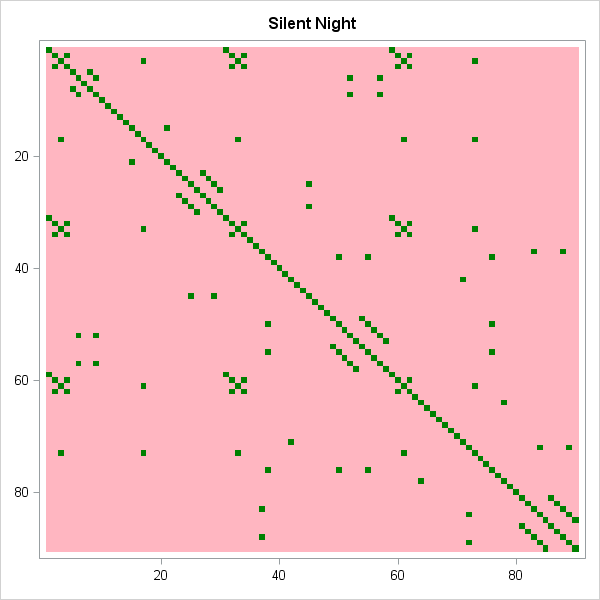 You can download the SAS program that creates these images. The program also computes visualizations of some contemporary songs such as "Last Christmas" by Wham!, "Someday at Christmas" (Stevie Wonder version), "Rockin' Around the Christmas Tree" (Brenda Lee version), and "Happy XMas (War Is Over)" by John Lennon and Yoko Ono. If you have access to SAS, you can even add your own favorite lyrics to the program! If you don't have access to SAS, Colin Morris's website enables you to paste in the lyrics and see the visualization.

In a little-known "deleted scene" from Elf, Buddy says that the second-best way to spread Christmas cheer is posting images for all to share! So post a comment and share your favorite visualization of a Christmas song!

Happy holidays to all my readers. I am grateful for you. Merry Christmas to all, and to all a good night!