In 2007, G. Szekely, M. Rizzo, and N. Bakirov published a paper in the The Annals of Statistics called "Measuring and Testing Dependence by Correlation of Distances." This paper defines a distance-based correlation that can detect nonlinear relationships between variables. This blog post describes the distance correlation and implements it in SAS.

An overview of distance correlation

For motivation, recall that the Pearson covariance between X and Y (which is usually defined as the inner product of two centered vectors) can be written in terms of the raw observations:

The terms (xi – xj) and (yi – yj) can be thought of as the one-dimensional signed distances between the i_th and j_th observations. Szekely et al. replace those terms with centered Euclidean distances D(xi, xj) and define the distance covarariance as follows:

The distance covariance between random vectors X and Y has the following properties:

The following SAS/IML program defines two functions. The first "double centers" a distance matrix by subtracting the row and column marginals. The second is the distCorr function, which computes the Szekely-Rizzo-Bakirov distance covariance, variances, and correlation for two samples that each have n rows. (Recall that X and Y can have more than one column.) The function returns a list of statistics. This lists syntax is new to SAS/IML 14.3, so if you are running an older version of SAS, modify the function to return a vector.

Let's test the DistCorr function on two 4-element vectors. The following (X,Y) ordered pairs lie one the intersection of the unit circle and the coordinate axes. The Pearson correlation for these observations is 0 because there is no linear association. In contrast, the distance-based correlation is nonzero. The distance correlation detects a relationship between these points (namely, that they lie along the unit circle) and therefore the variables are not independent.

The first example is the classic example (mentioned in the first paragraph of this article) that shows that a Pearson correlation of 0 does not imply independence of variables. The vector X is distributed in [-1,1] and the vector Y is defined as X2:

If you graph the Pearson and distance correlation against the parameter values, you obtain the following graph: 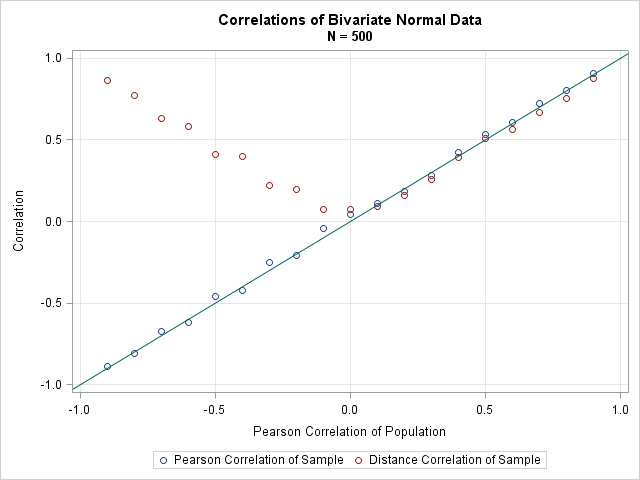 Limitations of the distance correlation

In summary, this article discusses the Szekely-Rizzo-Bakirov distance-based covariance and correlation. The distance correlation can be used to create a statistical test of independence between two variables or sets of variables. The idea is interesting and appealing for small data sets. Unfortunately, the performance of the algorithm is quadratic in the number of observations, so the algorithm does not scale well to big data.

You can download the SAS/IML program that creates the computations and graphs in this article. If you do not have SAS/IML, T. Billings (2016) wrote a SAS macro that uses PROC DISTANCE to compute the distance correlation between two vectors. Rizzo and Szekely implemented their method in the 'energy' package of the R software product.