Correlation is a fundamental statistical concept that measures the linear association between two variables. There are multiple ways to think about correlation: geometrically, algebraically, with matrices, with vectors, with regression, and more. To paraphrase the great songwriter Paul Simon, there must be 50 ways to view your correlation! But don't "slip out the back, Jack," this article describes only seven of them.

How can we understand these many different interpretations? As the song says, "the answer is easy if you take it logically." These seven ways to view your Pearson correlation are based on the wonderful paper by Rodgers and Nicewander (1988), "Thirteen ways to look at the correlation coefficient," which I recommend for further reading. 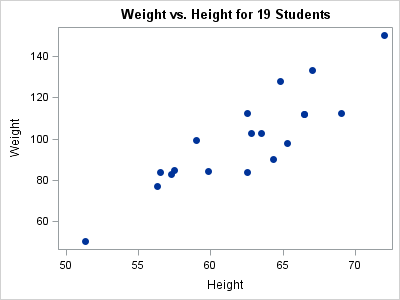 The simplest way to visualize correlation is to create a scatter plot of the two variables. A typical example is shown to the right. (Click to enlarge.) The graph shows the heights and weights of 19 students. The variables have a strong linear "co-relation," which is Galton's original spelling for "correlation." For these data, the Pearson correlation is r = 0.8778, although few people can guess that value by looking only at the graph.

In reality, most data are not well-approximated by a bivariate normal distribution. Furthermore, Anscombe's Quartet provides a famous example of four point-clouds that have exactly the same correlation but very different appearances. (See also the images in the Wikipedia article about correlation.) So although a graphical visualization can give you a rough estimate of a correlation, you need computations for an accurate estimate.

In elementary statistics classes, the Pearson sample correlation coefficient between two variables x and y is usually given as a formula that involves sums. The numerator of the formula is the sum of crossproducts of the centered variables. The denominator involves the sums of squared deviations for each variable. In symbols:

3. The inner product of standardized vectors

I have a hard time remembering complicated algebraic formulas. Instead, I try to visualize problems geometrically. The way I remember the correlation formula is as the inner (dot) product between two centered and standardized vectors. In vector notation, the centered vectors are x - x̄ and y - ȳ. A vector is standardized by dividing by its length, which in the Euclidean norm is the square root of the sum of the square of the elements. Therefore you can define u = (x - x̄) / || x - x̄ || and v = (y - ȳ) / || y - ȳ ||. Looking back at the equation in the previous section, you can see that the correlation between the vectors x and y is the inner product r = u · v. This formula shows that the correlation coefficient is inavariant under affine transformations of the data.

4. The angle between two vectors

Recall that the covariance between two variables x and y is

The covariance between two variables depends on the scales of measurement, so the covariance is not a useful statistic for comparing the linear association. However, if you divide by the standard deviation of each variable, then the variables become dimensionless. Recall that the standard deviation is the square root of the variance, which for the x variable is given by

Consequently, the expression sxy / (sx sy) is a standardized covariance. If you expand the terms algebraically, the "n - 1" terms cancel and you are left with the Pearson correlation.

6. The slope of the regression line between two standardized variables 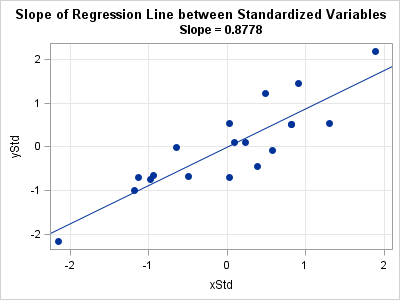 Most textbooks for elementary statistics mention that the correlation coefficient is related to the slope of the regression line that estimates y from x. If b is the slope, then the result is r = b (sx / sy). That's a messy formula, but if you standardize the x and y variables, then the standard deviations are unity and the correlation equals the slope.

This fact is demonstrated by using the same height and weight data for 19 students. The graph to the right shows the data for the standardized variables, along with an overlay of the least squares regression line. The slope of the regression line is 0.8778, which is the same as the correlation between the variables.

This article shows multiple ways that you can view a correlation coefficient: analytically, geometrically, via linear algebra, and more. The Rodgers and Nicewander (1988) article includes other ideas, some of which are valid only asymptotically or approximately.

What is your favorite way to think about the correlation between two variables? Leave a comment.