In some applications, you need to optimize a linear objective function of many variables, subject to linear constraints. Solving this problem is called linear programming or linear optimization. This article shows two ways to solve linear programming problems in SAS: You can use the OPTMODEL procedure in SAS/OR software or use the LPSOLVE function in SAS/IML software.

A linear programming problem can always be written in a standard vector form. In the standard form, the unknown variables are nonnegative, which is written in vector form as x ≥ 0. Because the objective function is linear, it can be expressed as the inner product of a known vector of coefficients (c) with the unknown variable vector: cTx Because the constraints are also linear, the inequality constraints can always be written as Ax ≤ b for a known constraint matrix A and a known vector of values b.

As an example of how to solve a linear programming problem in SAS, let's pose a particular two-variable problem: 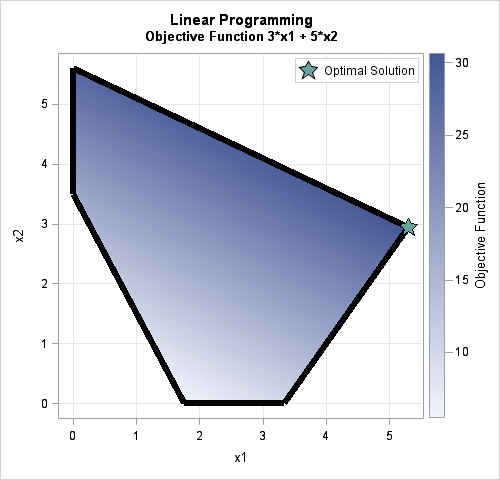 The graph shows the polygonal region in the plane that satisfies the constraints for this problem. The region (called the feasible region) is defined by the two axes and the three linear inequalities. The color in the interior of the region indicates the value of the objective function within the feasible region. The green star indicates the optimal solution, which is x = {5.3, 2.95}.

The theory of linear programming says that an optimal solution will always be found at a vertex of the feasible region, which in 2-D is a polygon. In this problem, the feasible polygon has only five vertices, so you could evaluate the objective function at each vertex by hand to find the optimal solution. For high-dimensional problems, however, you definitely want to use a computer!

Linear programming in SAS by using the OPTMODEL procedure

The OPTMODEL procedure prints two tables. The first (not shown) is a table that describes the algorithm that was used to solve the problem. The second table is the solution vector, which is x = {5.3, 2.95}.

For an introduction to using the OPTMODEL procedure to solve linear programming problems, see the 2011 paper by Rob Pratt and Ed Hughes.

Linear programming by using the LPSOLVE subroutine in SAS/IML

Not every SAS customer has a license for SAS/OR software, but hundreds of thousands of people have access to the SAS/IML matrix language. In addition to companies that license SAS/IML software, SAS/IML is part of the free SAS University Edition, which has been downloaded almost one million times by students, teachers, researchers, and self-learners.

Whereas the syntax in PROC OPTMODEL closely reflects the mathematical formulation, the SAS/IML language uses matrices and vectors to specify the problem. You then pass those matrices as arguments to the LPSOLVE subroutine. The subroutine returns the solution (and other information) in output arguments. The following list summarizes the information that you must provide:

The following SAS/IML program defines and solves the same LP problem as in the previous section. I've added plenty of comments so you can see how the elements in this program compare to the more compact representation in PROC OPTMODEL:

In the call to LPSOLVE, the first five arguments are output arguments. The first three of these are printed:

Although the LPSOLVE function was not as simple to use as PROC OPTMODEL, it obtains the same solution. The LPSOLVE subroutine supports many features that are not mentioned here. For details, see the documentation for LPSOLVE.