Last month I discussed how to solve linear programming (LP) problems in SAS by using PROC OPTMODEL in SAS/OR or by using SAS/IML software. You can use these same tools to solve mixed integer linear programming problems. The OPTMODEL procedure has the simpler syntax. The MILPSOLVE function in SAS/IML software provides similar functionality in an interactive matrix language.

The previous article solved a two-variable LP problem. If you constrain one of the variables to be an integer, you get a MILP problem, as follows: 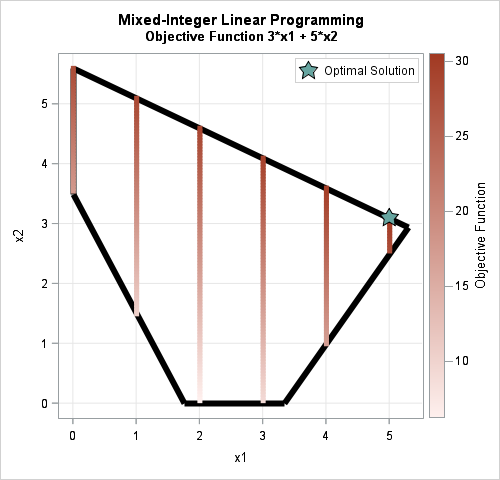 The following statements show one way to formulate and solve the MILP problem by using the OPTMODEL procedure in SAS/OR software:

The OPTMODEL procedure prints two tables. The first (not shown) describes the optimization algorithm and tells you that the optimal objective value is 30.5. The second table is the solution vector, which is x = {5, 3.1}.