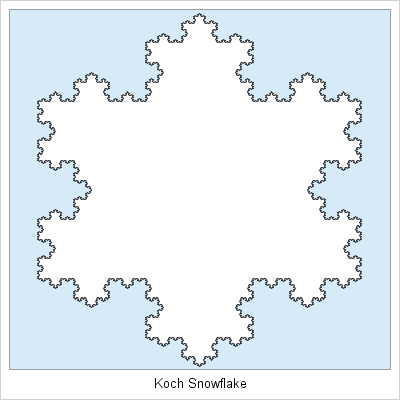 I have a fondness for fractals.

In previous articles, I've used SAS to create some of my favorite fractals, including a fractal Christmas tree and the "devil's staircase" (Cantor ) function. Because winter is almost here, I think it is time to construct the Koch snowflake fractal in SAS.

A Koch snowflake is shown to the right. The Koch snowflake has a simple construction. Begin with an equilateral triangle. For every line segment, replace the segment by four shorter segments, each of which is one-third the length of the original segment. The two middle segments are offset by 60 degrees from the direction of the original segment. You then iterate this process, with each step replacing every line segment with four others.

Two statements in the function might be unfamiliar. The direct product operator (@) quickly constructs points that are k/3 units along the original line segment for k=0, 1, 2, and 3. The ATAN2 function computes the direction angle for a two-dimensional vector.

Construct the Koch snowflake in SAS

Now that we have defined a function that can replace a segment by four shorter segments, let's define a function that applies that function repeatedly to each segment of a polygon. The following function takes two arguments: the polygon and the number of iterations. An N-sided closed polygon is represented as an (N+1) x 2 matrix of vertices.

The Koch snowflake that results from this iteration is shown at the top of this article. For completeness, here are the statements that write the snowflake to a SAS data set and graph it by using PROC SGPLOT:

Generalizations of the Koch snowflake

The KochPoly function does not check whether the polygon argument is an equilateral triangle. Consequently, use the function to "Koch-ify" any polygon! For example pass in the rectangle with vertices P = {0 0, 2 0, 2 1, 0 1, 0 0}; to create a "Koch box."

Enjoy playing with the program. Let me know if you generate an interesting shape!