Equations that involve trigonometric functions can have infinitely many solutions. For example, the solution to the equation tan(θ)=1 is θ = π/4 + kπ, where k is any integer. In order to obtain a unique solution to the equation, we define the "arc" functions: inverse trigonometric functions that return a principal value. For example, the Arctan function returns a principal value in the range (-π/2, π/2), such as Arctan(1) = π/4. In SAS software, the ATAN function computes the Arctan function.

You can extend the Arctan function in a natural way: given the coordinates (x, y) of a point in the plane, you can compute the angle formed between the x axis and the vector from the origin to (x, y). SAS provides the ATAN2 function for this computation. The ATAN2 function takes two arguments (the coordinates of an (x, y) pair) and returns the angle in the range (-π, π] that corresponds to the vector angle. 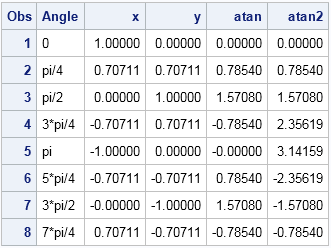 Notice that the ATAN and ATAN2 functions agree for points that are in the first and fourth quadrants. Notice also that both functions return their values in radians. You can convert radians to degrees by multiplying the radian measure by 180/π. 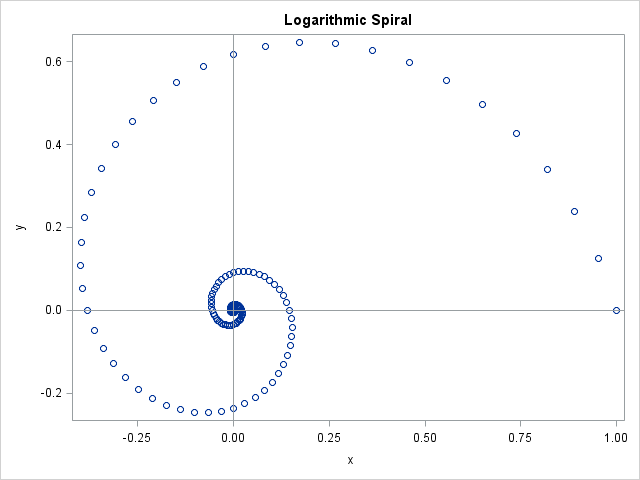 Suppose that you have data points such as are shown in the scatter plot at the left. The ATAN2 function enables you to compute an angle in (-π, π] for a given data point. But to reconstruct the curve, you need to compute angles outside that interval. The scatter plot shows points that lie along a logarithmic spiral as computed by the following program.

This algorithm is implemented in the following SAS/IML module, which assumes that the polar angle increases along the curve. With slightly more complicated logic, you can derive the polar angle for points along any parametric curve in the plane.

The variable phi is a vector of increasing values. It is equal to the theta vector, which contained the original sequence of angles in [0, 6π].

For any value, the ATAN function computes the principal arctangent of that value. For a point (x, y) in the plane, the ATAN2 function enables you to compute the angle formed between the x axis and the vector from the origin to (x, y). The ATAN2 function returns an angle in the range (-π, π], and the ATAN2 function has a jump discontinuity of 2π across the negative x axis. Using these facts, you can construct a continuous function that returns the polar angle for points along a parametric curve in the plane.

In my next blog post I will use this function to analyze data that seems to lie along a parametric curve in the plane.