Wikipedia has a page that presents a table of the presidents of the US by age. It lists the dates for which each president entered and left office, including those who died or resigned. It also provides the ages for each president on those dates. However, the table is hard to scan. I decided to import the data into SAS and create a graphic that visualizes the relevant data for all presidents.

Reading the president data into SAS

The first step is to load the data into a SAS data set. There are two SAS tricks that you can use to read the data:

You can download the SAS file that reads the dates and computes each president's age upon entering and leaving office.

A graph that shows the ages of presidents

I was interested in showing the age of each president when he began and left the presidency. I thought about creating a HIGHLOW plot of age versus the president's number (Washington=1 to Trump=45), but I wanted to also show the approximate years that each president served. Consequently, I decided to use a VECTOR plot with scatter plot overlays. 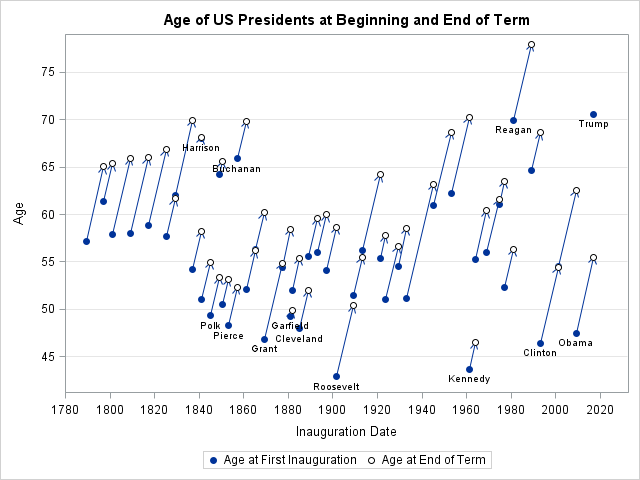 The graph displays the names of certain presidents. People who became president before turning 50 are shown along the bottom of the graph. The people who became president after the age of 65 are also shown. Notice that William Harrison (age 68) only lived a month past his inauguration. He and Garfield are mere blips on the graph. In contrast, the long arrow of FDR's 12-year presidency in the 1930s is easy to spot.

What can we learn from the graph?

Do you think you can create a better graph that shows the ages of US presidents? Download the data and post your best ideas!