A Markov transition matrix models the way that the system transitions between states. A transition matrix is a square matrix in which the (i,j)th element is the probability of transitioning from state i into state j. The sum of each row is 1. For reference, Markov chains and transition matrices are discussed in Chapter 11 of Grimstead and Snell's Introduction to Probability.

A transition matrix of probabilities

A Wikipedia article on Markov chains uses a sequence of coin flips to illustrate transitioning between states. This blog post uses the same example, which is described below.

Imagine a game in which you toss a fair coin until the sequence heads-tails-heads (HTH) appears. The process has the following four states:

Analyzing sequences of coin tosses can be interesting and sometimes counterintuitive. Let's describe the expected behavior of this system.

For the HTH-sequence game, suppose that you start a new game. The game starts in State 1. The following computation describes the evolution of the state vector:

Modeling a sequence of coin tosses

In general you can repeatedly multiple the state vector by the transition matrix to find the state probabilities after k time periods. For efficiency you should avoid concatenating results inside a loop. Instead, allocate a matrix and use the ith row to hold the ith state vector, as follows: 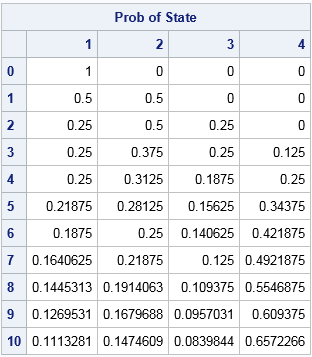 You can visualize the evolution of the probability distributions by making a series plot for each column of this output. You can download the SAS program that creates the plot and contains all of the computations in this article. The plot is shown below: 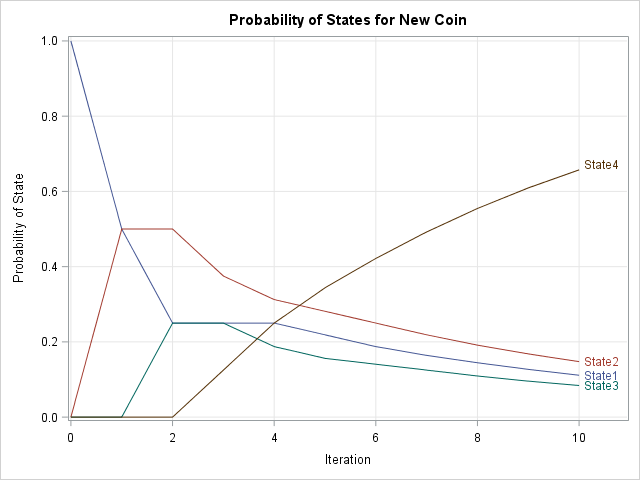 The plot shows the probability distributions after each toss when the system starts in State 1. After three time periods the system can be in any state. Over the long term, the system has a high probability of being in State 4 and a negligible chance of being in the other three states.

Modeling transitions in a population

The following graph gives the probability of the states for the population for the next 30 coin tosses: 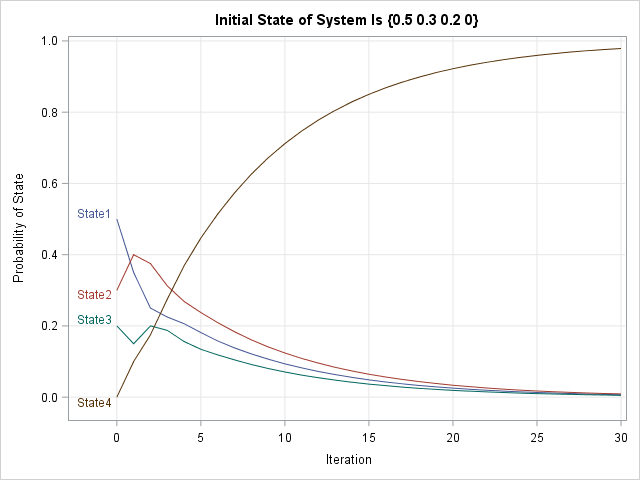 The initial portion of the graph looks different from the previous graph because the population starts in a different initial distribution of states. However, the long-term behavior of this system is the same: all games eventually end in State 4. For this initial population, the graph shows that you should expect 80% of the games to be in State 4 by the 13th toss.

An interesting application of using Markov chains was presented by Gongwei Chen at SAS Global Forum 2016. Chen built a discrete-time Markov chain model to forecast workloads at the Washington State Department of Corrections. Social workers and parole officers supervise convicted offenders who have been released from prison or who were sentenced to supervision by the court system. Individuals who exhibit good behavior can transition from a highly supervised situation into less supervision. Other individuals might commit a new offense that requires an increase in supervision. Chen used historical data to estimate the transition matrix between the different supervisory states. His model helps the State of Washington forecast the resources needed to supervise offenders.

In summary, it is easy to represent a transition matrix and a state vector in SAS/IML. You can iterate the initial distribution of states to forecast the state of the system after an arbitrary number of time periods. This is done by using matrix multiplication.

A Markov chain model involves iterating a linear dynamical system. The qualitative asymptotic behavior of such systems can be described by using the tools of linear algebra. In a future article, I will describe how you can compute statistical properties of Markov chain models from the transition matrix.