You can specify the names of data set variables in the SAS/IML READ statement, as follows:

Some of the advantages of reading data into vectors are:

Read data into a SAS/IML matrix

You can use the INTO clause in the READ statement to read data set variables into a SAS/IML matrix. All the variables have to be the same type, such as numeric. For example, the following statements read three numeric variables into a matrix:

The matrix X contains the raw data. Each column is a variable; each row is an observation. For many descriptive statistics, you can use a single function call to compute statistics across all columns. You can also compute multivariate statistics such as a correlation matrix: 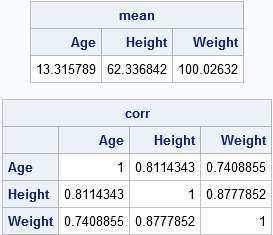 You can use this technique to create vectors whose names are different from the names of data set variables. For example, in my blog posts I often load data into vectors named x and y to emphasize that the subsequent analysis will work for any data, not just for the example data.

Some of the advantages of reading data into a matrix are:

I usually read raw data into a matrix and summarized data into vectors, but as you can see, there are advantages to both approaches.

What technique do you use to read data into SAS/IML?