In fact, it is possible to simulate the drunkard's walk in d dimensions. The drunkard starts at the origin of the coordinate system. He chooses a random coordinate direction and takes a unit step in either the positive or negative direction for that coordinate. If the drunkard takes N steps, you can determine the probability that the drunkard is in a particular location.

The computational methods used to simulate a random walk in higher dimensions are similar to the 1-D walk, so see my previous article for the background information.

In two dimensions, you can use a series plot to visualize the path of the drunkard as he stumbles to the north, south, east, and west. The following PROC IML program uses the Table distribution to draw 10 random values from the set {1, 2}, which are the two coordinate directions. The SAMPLE function makes random draws from the set {-1, 1} and determines whether the drunkard steps forward or backward in the chosen coordinate direction:

These two random vectors can be combined to form an N x d matrix where each column is a coordinate direction, each row is a time step, and the values 1, -1, and 0 indicate that the drunkard moves forward, backward, or does not move, respectively. This matrix contains the same information as the previous table. You can use the SUB2NDX function to convert subscripts into indices, and therefore create the matrix, as follows:

You can encapsulate the preceding statements into a module that implements the Drunkard's Walk algorithm. You can download the complete SAS program that generates the graphs and computations in this article. 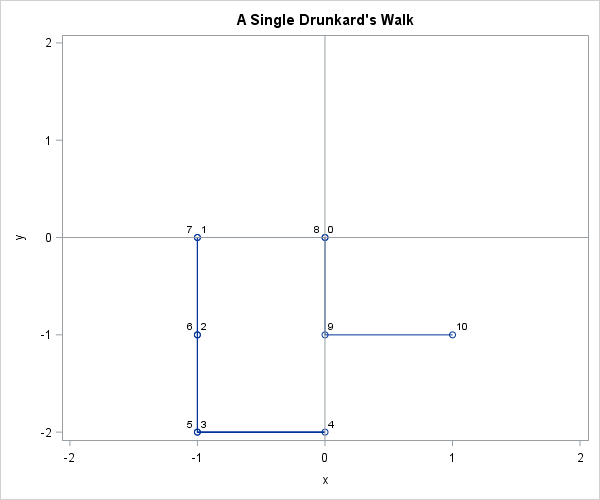 Visualizing the probability distribution of the final position

Just as in the one-dimensional case, you can use simulation to visualize the probability distribution of the final position of the drunkard. If the drunkard takes an even number of steps, he must end up an even distance away from the origin, where the distance is calculated by using the Minkowski metric, also known as the "Manhattan" or "taxicab" metric. The probability is highest that the drunkard returns to the origin, followed by the points that are two units away, four units away, and so forth. The following SAS/IML statements call the DrunkardWalk function 10,000 times and plots the counts for each final position by using a heat map: 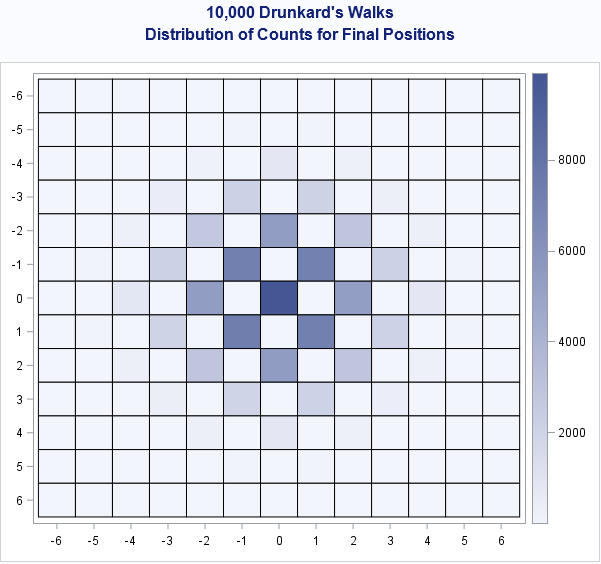 
The drunkard's walk in two or more dimensions is a fun simulation of a discrete distribution. SAS/IML provides the necessary functionality to simulate many walks and to analyze the distribution of the results.