I heard my daughter's screams from the upstairs bathroom and bounded up the stairs two at a time. Was she hurt? Bleeding? Was the toilet overflowing?

When I arrived in the doorway, she pointed at the wall and at the floor. The wall was splattered with black nail polish. On the floor laid a broken bottle in an expanding pool of black ooze.

"It slipped," she sobbed.

As a parent, I know that there are times when I should not raise my voice. I knew intellectually that this was one of those times. But staring at that wall, seeing what I was seeing, I could not prevent myself from yelling.

"Oh my goodness!" I exclaimed. "Is that a logarithmic spiral?" 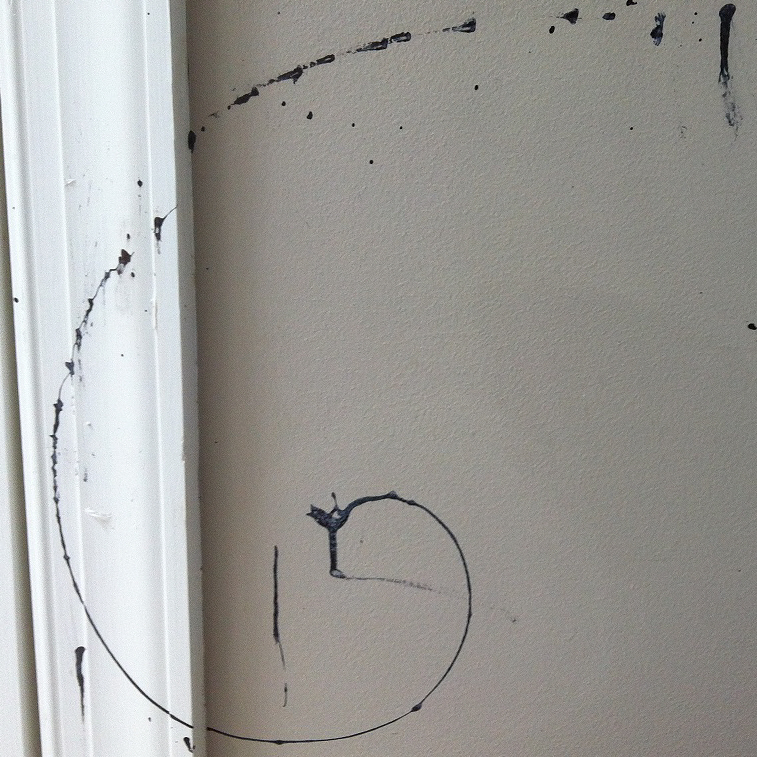 There on the wall was a spiral formed from the drops of black nail polish as the bottle had spiraled out of my daughter's hands and ejected its contents. Logarithmic spirals appear in many natural phenomena, such as the spiral arms of galaxies, the bands of hurricanes, and the curve of a mollusk's shell. However, I had not expected to see such a beautiful spiral of splattered nail polish on my wall.

I took a picture of the spiral, and we began a futile attempt to clean the wall. The nail polish proved impossible to wipe from the wall, although we were able to clean the tile floor.

How do you fit a logarithmic spiral?

As I was cleaning up the mess, my mind was racing. Is this really a logarithmic spiral? Could I construct a "spiral of best fit" that passes through the splattered drops?

I remembered that I once fit a circle to data by minimizing the radial distance between the data points and a circle with center (x0, y0) and radius R. This problem seems similar, but there are two differences. In the circle problem, I used the implicit equation of a circle (x-x0)2 + (y-y0)2 = R2. The logarithmic spiral is usually given explicitly as a polar (parametric) curve with the standard form R(θ) = a*exp(bθ), where a and b are unknown parameters. The second problem is that the spiral has multiple branches. For example, in the vertical direction there are several polar angles (π/2 and 5π/2), each with a different radius.

To construct a "spiral of best fit," you can do the following:

Finding points along the curve 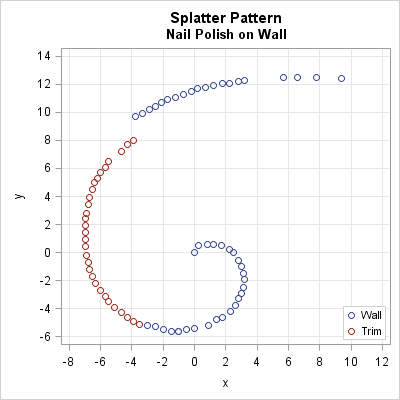 As punishment for my daughter's carelessness, I told her that she had to help me input data from the photograph. She claimed that this punishment was "cruel and unusual," but she did it anyway.

I printed out the photo and used a ruler to draw a grid of lines 1 centimeter apart across the page. I chose the origin to be a big blob of nail polish at the end of spiral, about 1/3 up from the bottom of the image. I then marked points at 5 mm intervals along the curve and read out the coordinates (to the nearest 1 mm) as my daughter typed them into SAS. The resulting coordinates are shown in the scatter plot. A large portion of the nail polish landed on the door-frame molding, which is raised 1.5 cm above the wall. That explains the apparent discontinuity in the upper left portion of the graph.

The objective is therefore to minimize the radial distance between the predicted and observed values:
F(x0, y0, a, b) = Σi   (xi-ui)2 + (yi-vi)2

Fit a logarithmic spiral to the data 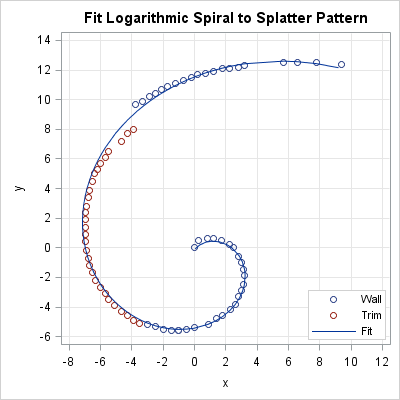 You can download the complete SAS program, which uses SAS/IML to optimize the parameters. The logarithmic spiral that best fits the data is shown overlaid on the scatter plot of the data. The curve fits remarkably well, with the obvious exception of the nail polish that splattered on the door frame (trim) instead of on the wall. If that section of data were moved upwards by 1–1.5 cm, then the fit would be even better. For the record, the parameter estimates are (x0, y0) = (0.69, -1.06), a = 22.34, and b = -0.35.

All models are wrong...including this one

As George Box famously said, "All models are wrong, but some are useful." However, this spiral model might be both wrong and useless.

I was so stunned by the appearance of this spiral on my wall that I didn't stop to think about whether a logarithmic spiral is a curve that can appear when a rotating bottle falls under the effects of gravity. The physics of falling objects is well understood.

Of course, I have no idea how the bottle was tumbling when it left my daughter's hands, nor do I know what angle the bottle was moving relative to the wall. Nevertheless, you can make some simplifying assumptions (bottle falling straight down, rotating in the horizontal plane as it falls,...) and compute the path that the nail polish would trace out in that simple situation. The physics-based model (not shown) also looks similar to the pattern on my wall. It's been a long time since freshman physics, and this is not a physics blog, so I invite the interested reader to download the SAS program and read my attempt to derive a physics-based model.

I think that these data can be fit by many families of spirals because the bottle rotated only about 1.25 times before it hit the wall. To distinguish between the spirals, the data should show at least two full rotations so that the decay function can be more accurately modeled. However, no matter what model you choose, you can use the same optimization ideas to fit the parameters in the model.

To me it doesn't matter whether the spiral on my wall was logarithmic, Archimedean, or something else. It was cool to see, and I got to spend a little time talking about math with my daughter, which is a special treat. And, of course, I enjoyed the statistical modeling and SAS programming that I used to analyze these data.

Now I must stop writing. I have to paint that wall!