I usually think of vectorization as applying to computations. However, I recently realized that the same principle applies when writing data to a SAS data set. I needed to compute a large number of results and write them to a SAS data set. Because each result required a similar computation, I wrote a program that looked something like the following.

In the preceding program, the call to the RANDGEN function is used in place of a complicated computation. After running the program I was disappointed. Almost 7 seconds for a mere 100,000 results?! That's terrible performance! After studying the program I began to wonder whether the problem was that I was calling the APPEND statement many times, and each call does only a little bit of work (writes one observation). That is a classic vectorize-this-step situation.

I decided to see what would happen if I accumulated 1,000 results and then output those results in a single APPEND statement. My hope was that the performance would improve by calling the APPEND statement fewer times and writing more data with each call. The rewritten program looked similar to the following:

Ahh! That's better! By calling the APPEND statement 100 times and writing 1,000 observations for each call, the performance of the program increased dramatically. 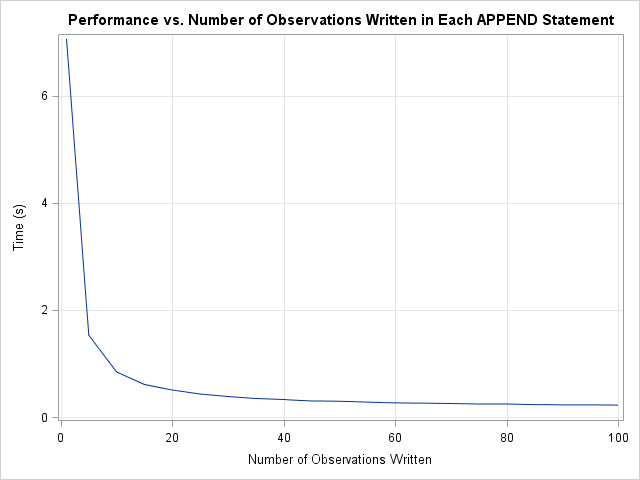 I wrote the second program so that the number of observations written by the APPEND statement (BlockSize) is a parameter. That enables me to run tests to examine the performance as a function of how many observations are written with each call. The following graph summarizes the situation.

There are two lessons to learn from this experience:

The principal of vectorization tells us to execute a small number of statements that each analyze a lot of data. The same principle applies to reading and writing data in a matrix language. Avoid reading or writing one observation at a time. Instead, you can improve performance by ensuring that each I/O statement reads or writes a hundred or more observations.