Last week I received a message from SAS Technical Support saying that a customer's IML program was running slowly. Could I look at it to see whether it could be improved?

What I discovered is a good reminder about the importance of vectorizing user-defined modules. The program in this blog post is not the customer's, but it illustrates the main ideas that I'd like to discuss. Consider the following SAS/IML module:

The function takes two scalar arguments, x and y, and does the following:

The details of the function are not important. The important facts are 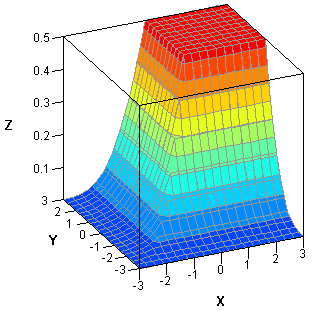 The function is not vectorized, which means that you cannot pass in two vectors for x and y and get back a vector of results. (Try it!) The problem is the MIN function, which returns the smallest value (a scalar) from among all elements of x and y.

For this example, you can call the MinCDF function 360,000 in about one second. The customer's function was more computationally expensive, and the customer was using the APPLY function to call the function millions of times. Consequently, the program was taking a long time to run.

Experienced SAS/IML programmers are familiar with the potential advantages of vectorizing a computation. For this computation, the key to vectorizing the function was to eliminate the call to the MIN function and instead call the elementwise minimum operator (><), which will return the vector of minimums when x and y are vectors. The new vectorized module is below:

Calling the vectorized function on two vectors of size 360,000 requires 0.01 seconds, which is a hundredfold speedup. For the customer's example, the speedup was even more dramatic. Notice in this case that rewriting the function was trivial: only the call to the MIN function was replaced.

Someone asked me the other day if it always possible to vectorize a computation. Unfortunately, the answer is "no." For some iterative algorithms, the second element of a result depends on the value of the first element. Algorithms of that sort cannot be vectorized, although you might be able to vectorize parts of the computation.

This example teaches an important lesson: although the APPLY function makes it easy to call a scalar-valued function on a vector of arguments, the convenience might come at a price. The APPLY function is essentially equivalent to calling a scalar-valued function in a loop, which can lead to poor performance. If you want to call a function with scalar arguments many times with different input values, investigate whether it is possible to rewrite the function so that it is vectorized. The speedup can be dramatic.