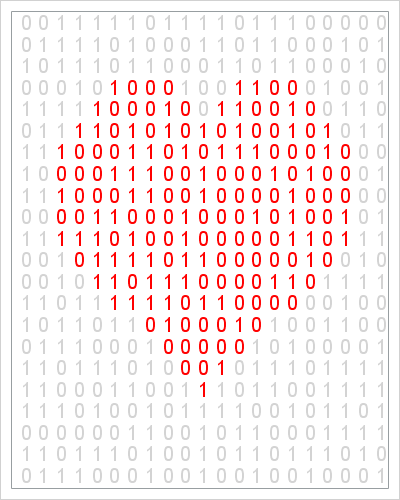 The xkcd comic often makes me think and laugh. The comic features physics, math, and statistics among its topics. Many years ago, the comic showed a "binary heart": a grid of binary (0/1) numbers with the certain numbers colored red so that they formed a heart.

Some years later, I used an equation in polar coordinates to draw a heart in SAS as a Valentine's Day gift to my wife. This year I thought it would be fun to combine these two ideas into a geeky Valentine's Day post.

The following SAS DATA step generates on a uniform grid of points near the origin. You can create an indicator variable that specifies which elements of the grid are inside the heart equation. By using the RAND function, you can generate a random 0 or 1 according to the Bernoulli distribution. You can then call the SGPLOT procedure to show the binary values, using red to display those that are inside the heart region and light gray to display the values outside the heart. The resulting image is shown at the top of this article.

The image is similar to the original hand-drawn xkcd comic, although the random binary values are different. I don't know what a "binary heart" means, but I find it interesting nonetheless.