A common task in SAS/IML programming is finding elements of a SAS/IML matrix that satisfy a logical expression. For example, you might need to know which matrix elements are missing, are negative, or are divisible by 2.

In the DATA step, you can use the WHERE clause to subset data. You can also use IF-THEN/ELSE logic to examine each observation in a data set to determine whether it satisfies a criterion. For data that are stored in a SAS/IML matrix, some programmers write a loop that iterates over the rows and/or columns and use IF-THEN/ELSE logic on each scalar element in the matrix. However, there is an easier and more efficient way: Use the LOC function, which finds the LOCation of elements that satisfy a logical expression.

This article provides examples of using the LOC function and a logical expression to find elements in a matrix that satisfy a criterion. It also points out that the SAS/IML language creates temporary 0/1 matrices from logical expressions.

The following SAS/IML statements define a 3 x 4 matrix. The LOC function is used to find the location of the elements that are missing, negative, and even, respectively:

as the second line of the previous program, then the following output is displayed when the first LOC function executes: 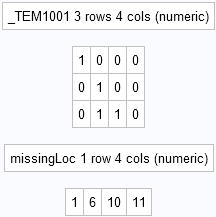 The output shows that PROC IML creates a temporary matrix named _TEM1001. The matrix is the result of evaluating the logical expression x=.. Notice that the 0/1 matrix contains a 1 in the locations for which the data are missing and a 0 in the other locations. Similarly, the other logical expressions in the program create temporary matrices with names like _TEM1002 and _TEM1003.

There are two takeaways from this example: