What is kurtosis? What does negative or positive kurtosis mean, and why should you care? How do you compute kurtosis in SAS software?

It is not clear from the definition of kurtosis what (if anything) kurtosis tells us about the shape of a distribution, or why kurtosis is relevant to the practicing data analyst. Mathematically, the kurtosis of a distribution is defined in terms of the standardized fourth central moment. The estimate of kurtosis from a sample also involves a summation that accumulates the fourth powers of a standardized variable. In SAS software, the formula for the sample kurtosis is given in the "Simple Statistics" section of the documentation.

This article presents an intuitive explanation of kurtosis that is often true in practice.

Let's compute the sample kurtosis for two variables in the Sashelp.Heart data set and see whether the kurtosis values tell us anything about the shape of the data distributions. The variables are AgeAtStart (the age of a patient when he or she entered the study) and Systolic (his or her systolic blood pressure). The following statements call the MEANS procedure to compute estimates for the mean, median, standard deviation, skewness, and kurtosis:

The last column shows that the kurtosis of the AgeAtStart data is negative, whereas the kurtosis of the Systolic data is positive. What does that mean? Well, first recall that whereas the mean, median, and standard deviation are expressed in the same units as the data, kurtosis (like skewness) is a dimensionless quantity. The zero value corresponds to a standard reference situation. For kurtosis, the reference distribution is the normal distribution, which is defined to have a kurtosis of zero. (Technically, I am describing the excess kurtosis, since this is the value returned by statistical software packages. Researchers sometimes consider the full kurtosis, which is 3 more than the excess kurtosis.)

The relationship between kurtosis and the shape of a distribution is complicated, but essentially the kurtosis compares the tails of the distribution to the normal distribution:

You can run a graphical experiment to see how the shape of the AgeAtStart and Systolic distributions compares with the normal distribution. What would you expect to see if you overlay a normal curve on a histogram of those variables? For the AgeAtStart variable, which has negative kurtosis, you should observe a distribution that has thin tails. For the Systolic variable, you should observe a distribution that has many observations near the mode and has at least one heavy tail. The following statements use PROC SGPLOT to overlay a histogram with a normal curve centered at the median: 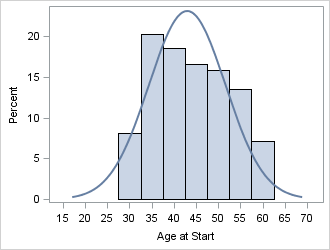 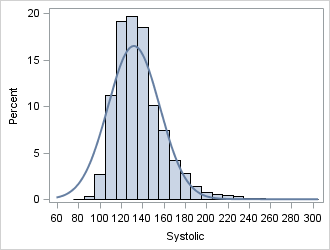 The Systolic variable has positive kurtosis. The histogram of the Systolic variable has a long right tail. There are many patients in the study with systolic blood pressure in the range 120–140. (The American Heart Association calls that range prehypertensive.) Compared to the normal distribution, there are relatively few observations in the ranges (80, 120) and (140, 170). However, the distribution has more extreme observations than would be expected for a normally distributed variable, so the distribution has a fat tail.

There are three SAS procedures that compute the kurtosis of data distributions. PROC MEANS was used earlier in this article. Use PROC UNIVARIATE when you want to fit a univariate model to the data. PROC IML includes the KURTOSIS function in SAS/IML 13.1, as shown in the following example:

The relationship between kurtosis and the shape of the distribution are not mathematical rules, they are merely intuitive ideas that often hold true for unimodal distributions. If your distribution is multimodal or is a mixture of distributions, these intuitive rules might not apply.

There have been many articles about kurtosis and its interpretation. Balanda and MacGillivray (1988, TAS) give examples of three different densities that each have the same kurtosis value but that look very different. They conclude that "because of the averaging process involved in its definition, a given value of [kurtosis]can correspond to several different distributional shapes" (p. 114).

They recommend that kurtosis be defined as "the location- and scale-free movement of probability mass from the shoulders of a distribution into its center and tails. In particular, this definition implies that peakedness and tail weight are best viewed as components [emphasis mine]of kurtosis.... This definition is necessarily vague because the movement can be formalized in many ways" (p. 116). In other words, the peaks and tails of a distribution contribute to the value of the kurtosis, but so do other features.

In contrast, Westfall (2014) is adamant that "kurtosis tells you virtually nothing about the shape of the peak—its only unambiguous interpretation is in terms of tail extremity." Westfall presents three distributions that have vastly different peak shapes, but the same kurtosis.