When I call R from within the SAS/IML language, I often pass parameters from SAS into R. This feature enables me to write general-purpose, reusable, modules that can analyze data from many different data sets.

I've previously blogged about how to pass values to SAS procedures from PROC IML by using the SAS/IML SUBMIT and ENDSUBMIT statements. You might be surprised to learn that the same technique works when calling R from the SAS/IML language.

To keep things simple, let's focus on a specific statistical example. Suppose that I want to compute the sample medians for several variables in several data sets. In Base SAS, I can compute medians by calling the MEANS procedure as follows:

If I want to create a reusable function that perform this analysis on arbitrary variables for an arbitrary data set, I could define a SAS macro named %MEDIAN that takes name of the data set and list of variables. Those parameters are substituted into the PROC MEANS syntax. For example, after defining the macro I could compute the medians of variables in the Sashelp.Cars data set with minimal typing:

This article shows how to write a reusable SAS/IML module that calls R to compute the medians for arbitrary variables in an arbitrary SAS data set. Yes, calling R to compute medians is "overkill." PROC MEANS, PROC UNIVARIATE, and the MEDIAN function in SAS/IML all provide this computation. However, the technique used in this simple example (namely, passing parameters from SAS to R) extends to more complicated analyses.

A basic call to R from SAS/IML

First, let's review how to call R from the SAS/IML language. The typical steps are as follows:

Now suppose that you want to repeat this task many times on different data. It would be helpful to write a SAS/IML function that calls R to compute the medians of specified variables. For example, you might want to call the function as follows:

The function will encapsulate the process of calling R. It will transfer the data to R, pass the variable names to R, tell R to compute the medians, and retrieve the results.

Passing arguments from SAS to R

R does not have the concept of macro variables, so although the expressions &RVarList and &Dataset look like they are macro expression, in reality the program substitutes the contents of those SAS/IML matrices at run time. Also, notice that I want R to receive a comma-separated list of quoted strings, so I used single quotes in SAS to make a string that contains double-quoted variable names.

Creating a list of variable names from a SAS/IML vector

Most likely the names of the variables are going to be contained in a SAS/IML vector, but you can use standard string concatenation in SAS to form the RVarList string from a vector of variable names. The following SAS/IML statements create a comma-separated list of double-quoted strings:

All the pieces are now in place. You can form a comma-separated list of quoted variable names from values in a SAS/IML vector. You can use the SUBMIT statement to pass that string and the name of the SAS data set to R. R can compute the desired statistics, and then you can retrieve the results. The following statements define a SAS/IML module that implements the algorithm:

You can now call the module on any SAS data set that will fit into RAM. (Recall that R must hold the complete data frame in memory.) 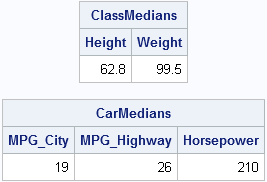 In conclusion, by using the SUBMIT statement in the SAS/IML language, you can pass parameters from SAS to R. This enables you to write general-purpose, reusable functions that call R to compute a statistical analysis. You can use this technique to seamlessly incorporate R computations into a larger SAS program.