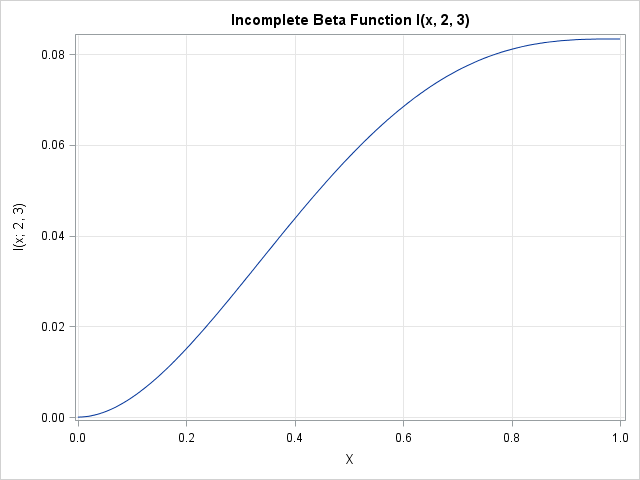 While sorting through an old pile of papers, I discovered notes from a 2012 SAS conference that I had attended. Next to the abstract for one presentation, I had scrawled a note to myself that read "BLOG about the incomplete beta function!" Okay, Rick, whatever you say!

In statistics, the incomplete beta function arises during the computation of confidence intervals for order statistics. Order statistics include the minimum value in a sample, the maximum value, the quartiles, the deciles, and so on. From the observed sample, it is possible to use the incomplete beta function to estimate confidence intervals for the quantiles of the population from which the sample was drawn.

I wrote the note to myself because I realized that there is an easy way to compute the incomplete beta function in SAS. However, this fact is not obvious from the SAS documentation because—as sometimes happens—people in different fields assign different names for the same function.

The incomplete beta function is the name given to a special function that arises in numerical analysis and differential equations. It is "incomplete" in the sense that it is defined as the integral from zero to x of some integrand that depends on two-parameters, a and b:

Consequently, the three relevant functions are as follows:

Suppose that you want to compute and plot the incomplete beta function for the parameters a=2 and b=3. The following SAS/IML statements compute the function:

A graph of the function is shown at the beginning of this article. You can see the classic sigmoidal shape that is associated with cumulative probability densities.

SAS is a large, comprehensive, software package that contains many commonly used functions. You might never need the incomplete beta function or its relatives in your work, but there is an important lesson to learn from this exercise. Namely, if you can't find something in the SAS documentation, ask Technical Support or post a question to a relevant SAS Support Community. What you are looking for might be available, but it could be called by a different name.