Finding the maximum value of a function is an important task in statistics. There are three approaches to finding a maxima: 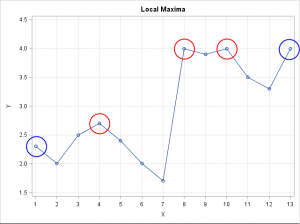 The third technique is the topic of this post. This post is motivated by two postings that I saw on Stack Overflow. One was a general question about finding a local maximum in a time series. The other was an application. The question concerned finding the locations at which the density of univariate data exhibits a peak. I was intrigued by the posted answers because they used an innovative sequence of function calls to the DIF and SIGN function. This article describes the technique and shows how to perform the computations in the SAS/IML language.

I don't claim that this is the best way to find local maxima of a time series, but I think it is interesting.

Find maxima in the interior

In the SAS/IML language you can use the DIF function to compute finite differences. Finite differences approximate the derivative of a function. (For a piecewise linear (PL) function, they are exactly the slopes of the PL segments.) A point in the interior of an interval is a maximum when a line segment with positive slope is followed by a line segment of negative slope. Examples are shown by the red circles in the previous graph. You can use the SIGN function (or signum function) to produce a vector of signs (+1, 0, or –1) for a set of negative, positive, or zero slopes. The following statements compute the signs of the slopes and the difference between successive signs: 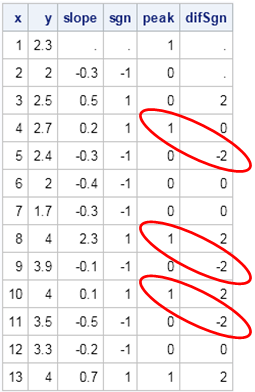 The table shows the slope and the sign of the slope for the example time series. Notice for this example that local maxima in the interior are always followed by a –2 in the difSgn column. Therefore if you want to locate the indices of the maxima, you can find the indices for which difSgn = –2 and then subtract 1 from the indices. I thought that this was a very cool result when I saw it on Stack Overflow, where it was presented as the following "one-liner":

A caveat and an extension for repeated maxima

Unfortunately, this DIF-SIGN-DIF sequence is not robust to the presence of repeated maxima. The example data does not contain any repeated maxima, but you can alter the example and convince yourself that the –2 values become –1 or 0 when the time series contains a repeated maximum.

In many applications (for example, daily closing stock prices), repeated maxima are somewhat rare. Accordingly, this simple method might be sufficient for your application. The following statement finds the locations of such maxima and extends the Stack Overflow solution by handling up to two repeated maxima. The statement calls the ELEMENT function to indicate when the difSgn vector is either –1 or –2.

Up to now, we've considered maxima on the interior of the time series domain. As you might remember from your calculus class, the maxima of a function can also occur at the endpoints of a closed interval. You can use IF-THEN statements to check the endpoints. Alternatively, you can add two new points to the time series, so that the original points are now interior points. That is the approach taken by the following function, which encapsulates a version of the algorithm that works for data without repeated maxima:

I'm not 100% happy with this function because it doesn't handle multiple consecutive maxima. If you give it a vector of constant values such as {1, 1, 1}, it incorrectly reports that the first and third values are maxima, but not the second.

Nevertheless, I like the elegance of the DIF-SIGN-DIF sequence, so I wanted to share this trick. You can devise more complicated algorithms to handle the degenerate cases, but this function works for most time series that arise in practice.