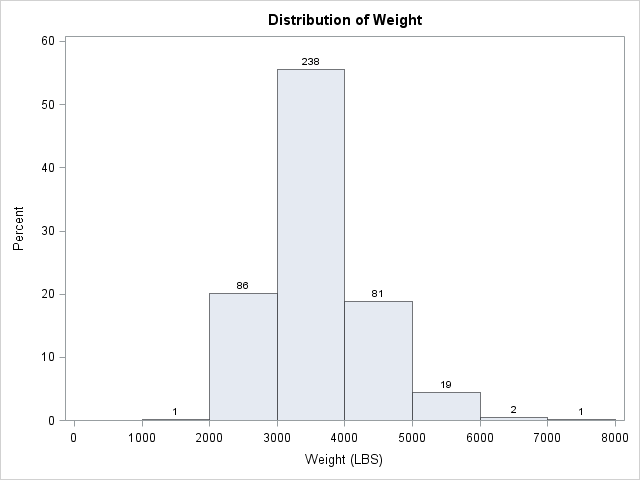 It is often useful to partition observations for a continuous variable into a small number of intervals, called bins. This familiar process occurs every time that you create a histogram, such as the one on the left. In SAS you can create this histogram by calling the UNIVARIATE procedure. Optionally, if you want to create a data set that contains the count of the observations in each bin, you can use the OUTHIST= option as shown in the following statements:

The end points of the bins are called the cut points. In the histogram, the cut points are evenly spaced: 0, 1000, 2000, ..., 8000. The nine cut points define eight bins of equal width. For the Sashelp.Cars data, no vehicle weighs less than 1000 pounds, so the first bin is empty.

Two related tasks are not supported by the UNIVARIATE procedure: finding the bin number for each observation, and using unequally spaced bins. You could write a DATA step for both these tasks, but SAS/IML language provides the BIN function, which is simpler to use. (The BIN function was introduced in SAS/IML 9.3.) The following example uses the same Sashelp.Cars data:

The b vector indicates to which bin each observation belongs. The value of b[i] is j when x[i] is in the jth bin. If desired, you can use that information to tabulate the counts in each bin, thus creating a tabular version of the histogram:

The HISTOGRAM statement in PROC UNIVARIATE does not permit you to use unevenly spaced bins, but the BIN function does. In fact, the BIN function supports two special missing values. The special SAS missing value .M is interpreted as "negative infinity" and the missing value .I is interpreted as "positive infinity." An interval of the form (.M 3000) means "all observations less than 3000" and an interval of the form [4000 .I) means "all observations greater than or equal to 4000." For example, the following cut points define two semi-infinite intervals and three other unevenly spaced bins. A call to the BIN function assigns each observation to the correct bin.

As I have shown previously, you can use the BIN function in conjunction with the QNTL function to group observations based on quantiles.