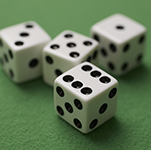 Tossing dice is a simple and familiar process, yet it can illustrate deep and counterintuitive aspects of random numbers. For example, if you toss four identical six-sided dice, what is the probability that the faces are all distinct, as shown to the left? Many people would guess that the probability is fairly high, and that the chance of getting duplicates values (pairs, three of a kind, or four of a kind) is low. In an informal survey of some of my nonstatistical friends, more than half guessed 50%–60% of tosses would result in four distinct values.

Those guesses are about twice as high as reality. Most rolls will contain duplicates. In order to get distinct values (no duplicates), the first die can show any of six faces, the second die can show any of five faces, and so on. The total number of possible rolls for four dice is 64. Consequently, the probability of rolling distinct values with four dice is (6*5*4*3) / 64 = 0.277 or about 28%.

Equivalently, 72% of the tosses result in one or more duplicate values. If you feel more comfortable with simulation than with combinatorics, the following statements simulate one million rolls of four dice. I count the number of unique values for each roll and tabulate the results:

Why should you care about any of this? Well, as I wrote at the beginning of this post, dice illustrate aspects of random numbers. This post was motivated by the fact that a SAS customer reported to Technical Support that he was getting some duplicate values when he used the RAND function to generate a million random uniform values on the interval [0,1]. He wanted to know if this result indicates a bug in the RAND function. No. The dice example in this post teaches two lessons:

In my next post I will discuss numbers that are generated by the SAS RAND function. I will show that you should expect to see duplicate values in a large sample of uniformly distributed random values. But how large? Do you need to generate a million values? Nope. You can expect duplicate values in much smaller samples. Stay tuned.