Let's apply these results to uniformly distributed uniform numbers on the interval (0,1). The SAS RAND function generates numbers with 32-bit accuracy, so there are about 232 distinct values that it will return in the interval (0,1). Let's use this fact to apply the "birthday matching problem" to uniform random values in (0,1). We want to compute the probability of a sample of size N having all unique values (no duplicates) when there are approximately 232 total values ("birthdays") to choose from. The following SAS/IML statements compute this probability for a samples of size 1–150,000: 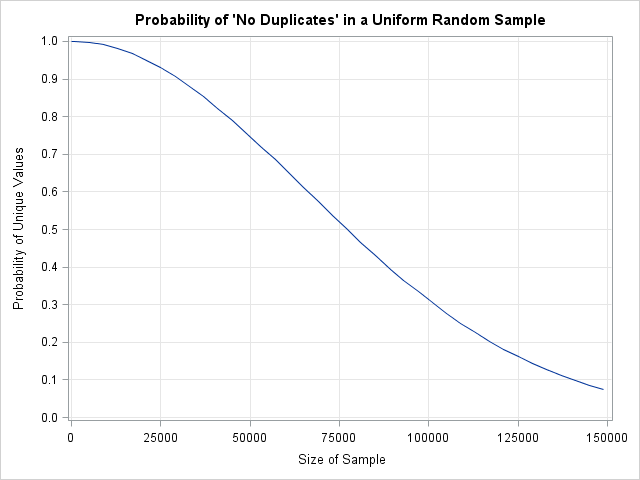 This result is an example of the "birthday matching problem," and it is counterintuitive. When I began looking at this problem, my intuition was that duplicates would appear when the size of the random sample got close to a million. After all, there are almost 232 (more than four billion) possible values that the RAND function can generate! But as the sample size grows, so does the number of previous values that the next value can match. As these results demonstrate, duplicate values are expected in a random uniform sample that is as small as 77,000. For a sample of size one million, you can expect about 116 duplicates.

To make sure that I haven't made a major mistake, the following SAS/IML statements simulate 100 samples with uniform random numbers. (The SAS/IML RANDGEN function, like the RAND function in Base SAS, calls the Mersenne-Twister algorithm.) Each sample is of size 77,000.

You can run the same experiment in other statistical computing languages and observe similar results. Derek O'Connor (2011) wrote a very nice article about duplicate values in random number streams in the MATLAB language. O'Connor concludes that duplicates are "not a deﬁciency in MATLAB’s ...random number generator..., but the inevitable result" of generating a long vector of random values. The documentation for the R language random number generators states that "most of the supplied uniform generators return... at most 2^32 distinct values and long runs will return duplicated values." In the R language you can use an expression such as sum(duplicated(runif(150000))) to examine the number of duplicate values.

In conclusion, it is not a bug to find duplicate values in a moderately sized sample of uniformly distributed values. The underlying probabilities (as encountered in the familiar "birthday matching problem") show that this behavior is correct. For samples of size 77,000 or more, duplicate values are expected.