SAS enables you to specify a color in several ways. This article shows how to use color names and RGB colors to specify colors in the SAS statistical graphics procedures, such as PROC SGPLOT. It gathers together color resources in a single location so you might want to bookmark this article for future reference.

SAS knows dozens of names of colors. There are "red" and "brown," of course, but also designer colors such as "aquamarine," "chartreuse," "khaki," and "teal." The following call to the SGPLOT procedure creates a scatter plot for which the marker color is set to "rose": 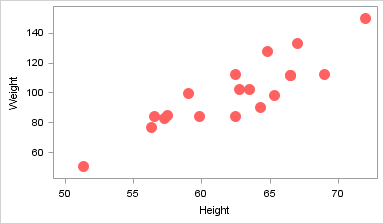 If you want to see some of the color names that SAS recognizes, run the following statements, which will print a list of colors to the SAS log:

Some of the more "imaginative" names that SAS supports (such as "Peru," "Thistle," and "Gainsboro") might be unfamiliar. Fortunately, SAS has a color-naming scheme that enables you to specify a descriptive name for many colors, such as "Red," "Light Gray," or "Dark Green." To use the color-naming scheme, choose one value from each of the following categories:

So, for example, valid names for colors include the following:

You can also specify a mixture of hues by specifying two adjacent hues in the list. Optionally, you can use the -ish suffix to diminish a hue, as in the following examples:

For example, the following scatter plot sets the color of markers by using the SAS color-naming scheme: 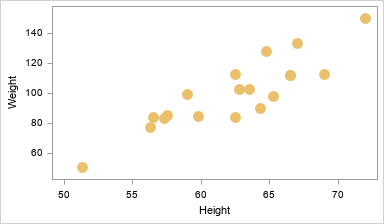 Representing colors by their RGB values

SAS also enables you to specify a color by using the red-green-blue (RGB) color model. The RGB color model is an additive model in which a color is specified in terms of red, green, and blue components. Each component ranges from 0 (which indicates the absence of a component) to 255 (which indicates the full presence of a component). A color is therefore a triplet of values that indicates the relative proportions of red, green, and blue. For example, the RGB triplet (255, 96, 96) represents a color that has a maximum amount of red and a small amount of green and blue.

The drawback of the RGB model is readability. If I write a program and specify a color as the RGB triplet (255, 96, 96), it is difficult to know what color is going to be produced. It turns out that this color is exactly "Rose," but you might have had a hard time predicting that in advance.

Most of the time, RGB triplets are compactly represented by a hexadecimal integer. The prefix CX tells SAS to interpret the integer as a color. You can find the hexadecimal representation of a color such as "Rose" by using the handy reference chart that lists SAS colors and their hexadecimal values.

The chart says that the RGB color for "Rose" is CXFF6060. This value is read two digits at a time:

Consequently, the following statements reproduce the first image in this article:

If you are a hard-core programmer, you're probably already thinking about how to write a SAS macro that converts a triplet of RGB values into a hexadecimal color. If you want to try to construct the macro yourself, stop reading now!

You can use the following SAS macro to create a hexadecimal value from a triplet of RGB colors. It's easy to use the PUT function to construct the hexadecimal value inside of a DATA step, but it is slightly more challenging to use the macro language to construct an "in-line" string that can be used outside of the DATA step. You can use the following macro to specify the COLOR= option for a statement in the SGPLOT procedure: