Sometimes it is useful to group observations based on the values of some variable. Common schemes for grouping include binning and using quantiles.

In the binning approach, a variable is divided into k equal intervals, called bins, and each observation is assigned to a bin. In this scheme, the size of the groups is proportional to the density of the grouping variable. In the SAS/IML language, you can use the BIN function to assign observations to bins.

However, sometimes it is useful to have approximately the same number of observations in each group. In this case, you can group the observations into k quantiles. One way to do this is to use PROC RANK and to specify the GROUPS= option, as follows: 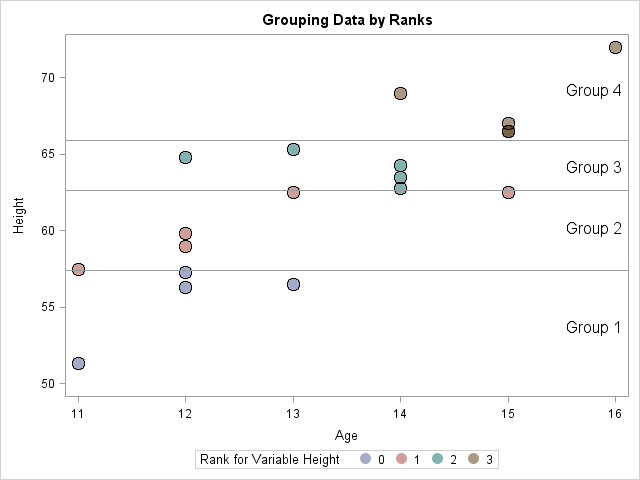 A scatter plot of the data (click to enlarge) is shown with markers colored by group membership. There are 19 observations in this data set. The RANK procedure puts four observations into the first group and five observations into each of the next three groups, which is an excellent distribution of the 19 observations into four groups. (In Group 4, there are two markers with the coordinates (15, 66.5).) The TIES= option specifies how to handle tied values. I specified TIES=HIGH because that option is consistent with the definition of a quantile for a discrete distribution.

In the SAS/IML language, you can use the QNTL subroutine and the BIN function to construct a function that groups observations by quantiles, as follows:

There are several statistical uses for creating k groups with roughly the same number of observations in each group. One is when assigning colors to a choropleth map or a heat map. Rather than chop the range of the response variable into k equal intervals, it is often better to choose 5 or 7 quantiles and color the regions by quantiles of the response. This technique is especially valuable when the response variable has a long-tailed distribution.