If you use a word three times, it's yours.
-Unknown

When I was a child, my mother used to encourage me to increase my vocabulary by saying, "If you use a word three times, it's yours for life." I believe that the same saying holds for programming techniques: Use a technique three times, and it sticks with you.

I've blogged before about various ways to fill or extract portions of a matrix. I recently used the ROW/COL technique for the third time, and I suspect I will use it more in the future. The technique (which is explained in a previous post) uses two helper functions, ROW and COL, to fill and extract certain elements in a matrix, such as the upper or lower triangular elements. The ROW and COL functions are new in SAS/IML 13.1, which is shipped with SAS 9.4m1. For example, the following statements fill the lower triangular portion of a matrix with random variates from a standard normal distribution: 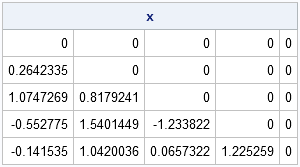 Filling the lower-triangular portion of a matrix with random numbers is not just an example that demonstrates this technique, it is also the first step in the simulation of variates from a Wishart distribution.

You can use the r and c matrices to define the indices for other portions of a matrix. For example:

Try it out. And if you use it three times, it's yours for life!