Robert Allison posted a map that shows the average commute times for major US cities, along with the proportion of the commute that is attributed to traffic jams and other congestion. The data are from a CEOs for Cities report (Driven Apart, 2010, p. 45).

Robert use SAS/GRAPH software to improve upon a somewhat confusing graph in the report. I can't resist using the same data to create two other visualizations of the same data. Like Robert, I have included the complete SAS program that creates the graphs in this post.

The following bar chart (click to enlarge) shows the mean commute time for the cities (in hours per year), sorted by the commute time. You can see that the commute times in Chicago and New Orleans are short, on average, whereas cities like Nashville and Oklahoma City (and my own Raleigh!) are longer. The median of the 45 cities is about 200 hours per year, and is represented by a vertical line. 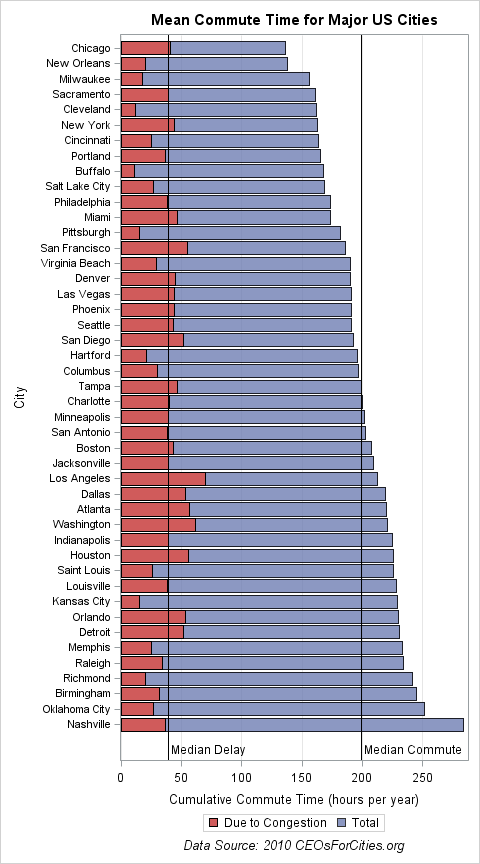 The plot was created by using the SGPLOT procedure. The ODS GRAPHICS statement is used to set the dimensions of the plot so that all of the vertical labels show, and the vertical axis is offset to make room for the labels for the reference lines. Thanks to Sanjay Matange who told me about the NOSCALE option, which enables you to change the size of a graph without changing the size of the fonts.

Although the previous graph is probably the one that I would choose for a report that is intended for general readers, you can use a scatter plot to create a more statistical presentation of the same data.

In the bar chart, it is hard to compare cities. For example, I might want to compare the average commute and congestion in multiple cities. Because the cities might be far apart on the bar chart, it is difficult to compare them. An alternative visualization is to create a scatter plot of the commute time versus the time spent in traffic for the 45 cities. In the scatter plot, you can see that Nashville and Oklahoma City have moderate congestion, even though their mean commute times are large (presumably due to long commutes). In contrast, the congestion in cities such as Los Angeles, Washington, and Atlanta are evident. 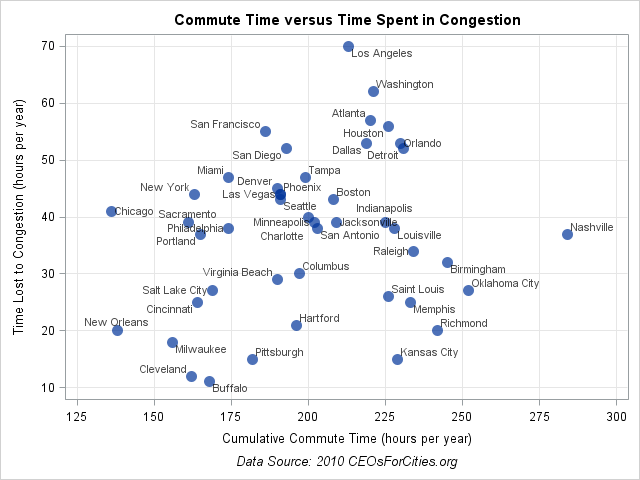 The plot was created by using the SGPLOT procedure. The DATALABEL= option is used to label each marker by the name of the city.

What aspects of these data do you find interesting?