When I was at SAS Global Forum last week, a SAS user asked my advice regarding a SAS/IML program that he wrote. One step of the program was taking too long to run and he wondered if I could suggest a way to speed it up. The long-running step was a function that finds the largest eigenvalue (and associated eigenvector) for a matrix that has thousands of rows and columns. He was using the EIGEN subroutine, which computes all eigenvalues and eigenvectors—even though he was only interested in the eigenvalue with the largest magnitude.

I asked some questions about his matrix and discovered that it had some important properties:

The power iteration method requires that you repeatedly multiply a candidate eigenvector, v, by the matrix and then renormalize the image to have unit norm. If you repeat this process many times, the iterates approach the largest eigendirection for almost every choice of the vector v. You can use that fact to find the eigenvalue and eigenvector.

The power iteration method when the dominant eigenvalue is positive

It is easy to implement a SAS/IML module that implements the power iteration method for a matrix whose dominant eigenvalue is positive. You can generate a random vector to serve as an initial value for v, or you can use a fixed vector such as a vector of ones. In either case, you form the image A v, normalize that value, and repeat until convergence. This is implemented in the following function:

Efficiency of the power iteration method

Finding the complete set of eigenvalues and eigenvectors for a dense symmetric matrix is computationally expensive. Multiplying a matrix and a vector is, in comparison, a trivial computation. I know that the power method will be much, much faster, than computing the full eigenstructure, but I'd like to know how much faster. Let's say I have a moderate-sized symmetric matrix. About how much faster is the power method over computing all eigenvectors? To be definite, I'll compare the times for symmetric matrices that have up to 2,500 rows and columns.

I previously have blogged about how to compare the performance of algorithms for solving linear systems. I will use the same technique to compare the performance of the PowerMethod function and the EIGEN subroutine. The following loop constructs a random symmetric matrix for a range of matrix sizes. For each matrix, the program times how long it takes the PowerMethod and EIGEN routines to run: 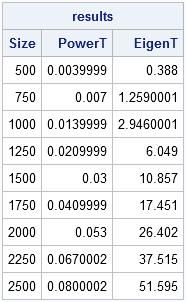 The results are pretty spectacular. The power method algorithm is virtually instantaneous, even for large matrices. In comparison, the EIGEN computation is a polynomial-time algorithm in the size of the matrix. You can graph the timing by writing the times to a data set and using the SGPLOT procedure: 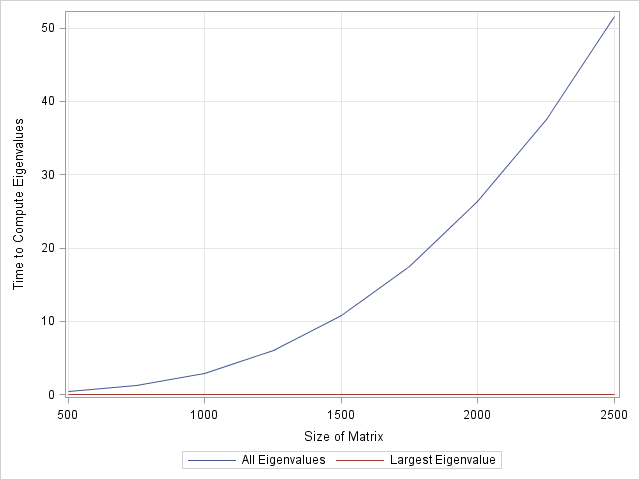 In the interest of full disclosure, the power method converges at a rate that is equal to the ratio of the two largest eigenvalues, so it might take a while to converge if you are unlucky. However, for large matrices the power method should still be much, much, faster than using the EIGEN routine to compute all eigenvalues. The conclusion is clear: The power method wins this race, hands down!

What if the dominant eigenvalue is negative?

If the dominant eigenvalue is negative and v is it's eigenvector, v and A*v point in opposite directions. In this case, the PowerMethod function needs a slight modification to return the dominant eigenvalue with the correct sign. There are two ways to do this. The simplest is to compute z = A*(A*v) until the algorithm converges, and then compute the eigenvalue for A in a separate step. An alternative approach is to modify the normalization of v so that it always lies in a particular half-space. This can be accomplished by choosing the direction (v or -v) that has the greatest correlation with the initial guess for v. I leave this modification to the interested reader.

And to my mathematical friends: did you notice that I used random symmetric matrices when timing the algorithm? Experimentation shows that the dominant eigenvalue for these matrices are always positive. Can anyone point me to a proof that this is always true? Furthermore, the dominant eigenvalue is approximately equal to n/2, where n is the size of the matrix. What is the expected value and distribution of the eigenvalues for these matrices?