Because the SAS/IML language is a general purpose programming language, it doesn't have a BY statement like most other SAS procedures (such as PROC REG). However, there are several ways to loop over categorical variables and perform an analysis on the observations in each category.

One way is to use the powerful UNIQUE-LOC technique, which I have blogged about several times and wrote about in my book, Statistical Programming with SAS/IML Software. This is a convenient technique when all of the data fit into memory and when there is a single BY variable.

However, sometimes you might need to process data that does not fit into RAM. In this case, you can use a DO loop to iterate over the categories and use WHERE processing inside the loop to read only a single BY group into memory (assuming each BY group fits). Furthermore, you might want to analyze the joint levels of several categorical variables, and it easy to compute the joint levels by using PROC FREQ.

Computing the BY groups 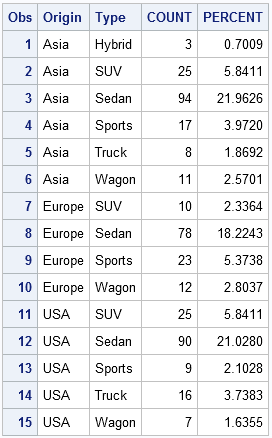 Notice that some potential 3x6 combinations do not appear in the data. For example, these data do not contain a European or American hybrid vehicle, nor a European truck.

Now suppose that you want to iterate over these 15 categories and do an analysis of the observations that belong to each. The next section shows how to proceed if the data set is so large that it doesn't fit into memory, but each individual BY group does fit into memory.

Analyzing BY groups in PROC IML

For the sake of the example, I'll compute a trivial statistic: the mean of each BY group. Doing this computation in SAS/IML software is completely unnecessary because you can compute it more efficiently with PROC MEANS, but the point of this example is to show how you can access the observations in each BY group within the SAS/IML language.

The following program reads the joint categories (the BY group levels) from the FreqOut data set into SAS/IML vectors. Then, for each BY group, it uses a READ statement with a WHERE clause to read only the observations in that BY group. 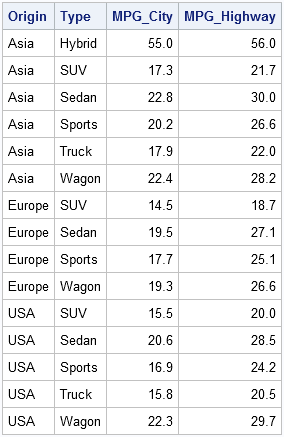 A few comments on this program:

I'll repeat this isn't an efficient way to read data compared to reading it all at once. However, this technique might be necessary when the data set is large. It can also be used when the groups that should be analyzed are specified in a data set such as FreqOut. It is not necessary that the data set contain all levels of the BY groups. For example, if you want to analyze data for a handful of vehicle types (or states, or counties, ...), you can use this approach to read only the data for groups that you are interested in.

This same technique is also a way to avoid calling a SAS/IML program in a macro %DO loop. Some programmers like to write a program that handles a single subgroup and then use a macro loop to subset their data and call the program on each subset. (For example, the program might analyze one year's worth of data, and you want to call it for all the years 1990–2010.) I find it difficult to debug and modify programs that have lots of macro variables and are embedded in a macro loop. Therefore I prefer the technique presented here, which avoid using macro statements.