My elderly mother enjoys playing Scrabble®. The only problem is that my father and most of my siblings won't play with her because she beats them all the time! Consequently, my mother is always excited when I visit because I'll play a few Scrabble games with her.

During a recent visit, I managed to squeak out a couple of rare victories. (The key is to play when she's tired, like right before naptime!) The following panel shows a concise summary of our games (click to enlarge): 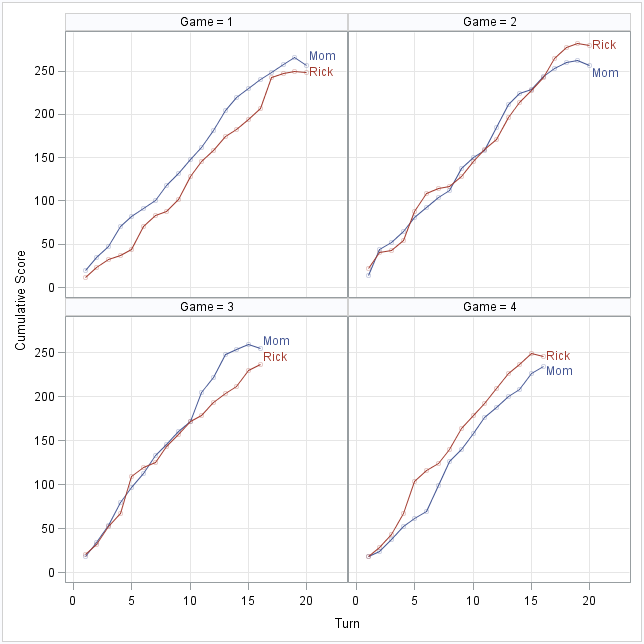 The graphic display has the following features:

In particular, you can read off some important plays for each game:

I call this a "play-by-play chart." A few years ago, I saw this display used very effectively to show the minute-by-minute evolution of the score of a basketball game, but I can't remember where I saw it.

This display is best used to show the progression of scores for games that feature a lot of scoring, and especially games in which the points per turn can vary. For example, the chart is effective in basketball for seeing the effect of three-point plays and foul shots on the score. This would also be a good display for bowling, golf, and "target shooting" games such as darts and archery. I wouldn't use it for baseball or soccer.

The chart is easy to construct by using the SGPANEL procedure. I added semi-transparent observations in the background, but you can omit the SCATTER statement if you want to see only the lines.

In addition to this play-by-play chart, you might be interested in the distribution of each player's word scores over multiple games. You can use the SGPLOT procedure for each player, or you can combine histograms into a single paneled display by using PROC SGPANEL as follows: 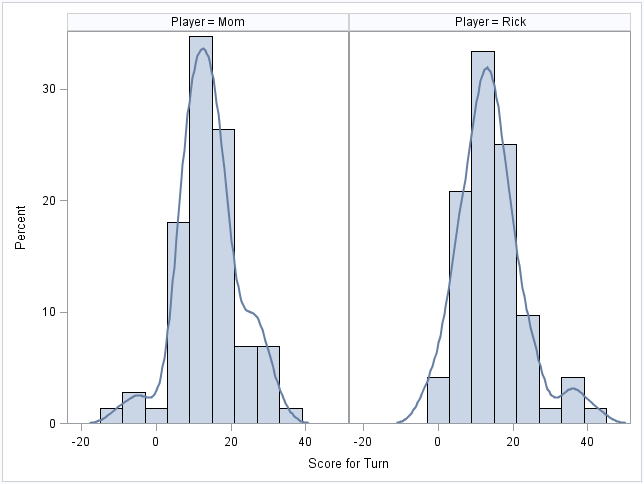 The distributions of scores reveal several differences in playing styles and strategies:

I only play Scrabble recreationally, but the SGSPANEL procedure enables me to visualize my scores and analyze my playing style. For me, Scrabble is fun to play... and fun to analyze.