There have been many papers, books, and dissertations written on the topic of root-finding, so why am I blogging about a 17th-century algorithm? Newton's method is an important tool in my numerical toolbox because of three features:

Its biggest disadvantages are:

Requiring a derivative is both an advantage and a disadvantage. It is the derivative that makes Newton's method so effective. However, it can be a tedious task to type in the derivative matrix for complicated functions. Or you might want the root of a function that does not have a closed-form analytical expression. (Perhaps it involves a simulation.) In that case, obtaining a derivative expression can be difficult and computationally expensive.

An Example of Newton's Method

You can implement Newton's method for multivariate functions by using the SAS/IML language. The SAS/IML documentation contains an example of Newton's method, but I don't like the coding style of the program because it uses global variables. I prefer modules that are self-contained functions with arguments and local symbol tables so that I can use them as components in other programs without worrying about side-effects.

Still, the example is pretty good, so I will use the main ideas but re-code the implementation.

Because the graph of this function is in four-dimensional space, you can't directly plot the graph of the function. However, you can visualize the locations of the zero(s) by plotting the magnitude (norm) of the function. In the following graph, I use the contour plot in SAS/IML Studio to graph the quantity || f || = sqrt(f12 + f22) on a uniform grid of (x1, x2) values. 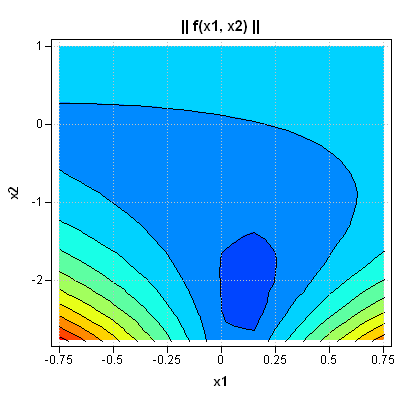 The minimum value of the function is somewhere in the dark blue region. Therefore, a good initial point to use for Newton's method is (0, -2). (The example in the SAS/IML documentation uses an initial guess of (0.1, -2), which is even closer to the root.)

The Newton module implements Newton's method and calls the Func and Deriv functions for each Newton step.

This version of Newton's method is based on the SAS/IML documentation, but it is not the only version possible. For example, the convergence criterion for this version is that max(abs(f)) is small. This quantity is the L∞ norm. You might prefer to use the usual Euclidean norm, which is computed as sqrt(ssq(f)).

The following statements call the Newton subroutine and print the zero of the function. The function evaluated at the root is also printed, in order to verify that the function is, indeed, nearly zero.