In my statistical analysis of coupons article, I presented a scatter plot that includes the identity line, y=x. This post describes how to write a general program that uses the SGPLOT procedure in SAS 9.2. By a "general program," I mean that the program produces the result based on the data, not by hard-coding parameters for a specific example. I also want the program to work for a general line of the form y = a + bx.

Vertical and horizontal lines are easy to create by using the REFLINE statement in the SGPLOT procedure. Diagonal lines are a little harder. My approach is to use the VECTOR statement. See the end of this post for other ways to accomplish this task.

Editor's Note: In SAS 9.3, the SGPLOT procedure supports a LINEPARM statement. See my next article for how to add a diagonal line in SAS 9.3 or later.

The Problem and a Solution

The reason that this is not a trivial task is that the VECTOR statement will expand the plot axes if you are not careful. For example, if I plot a vector from (-600, -700) to (800, 900), the X axes will be expanded to [-600, 800] and the Y axis to [-700, 900]. A solution to this, which is due to my colleague Sanjay Matange, is to use the MIN= and MAX= options in the XAXIS and YAXIS statements to maintain the axis view ranges that are determined by the X and Y data in the scatter plot. This results in "clipping" the diagonal line so that it does not extend beyond the range of the data.

Adding an identity line is simple enough that I can usually perform the first step in my head and use the DATA step (rather than PROC IML) for the next three steps. However, I will use the SAS/IML language in this article because it is useful for plotting lines with arbitrary slopes and intercepts.

The data for this example are in the SASHELP.Cars data set. I will create a scatterplot of the MPG_CITY and MPG_HIGHWAY variables, and add the identity line. Vehicles above the line get better fuel economy on the highway than they do in the city. The final graph looks like the following: 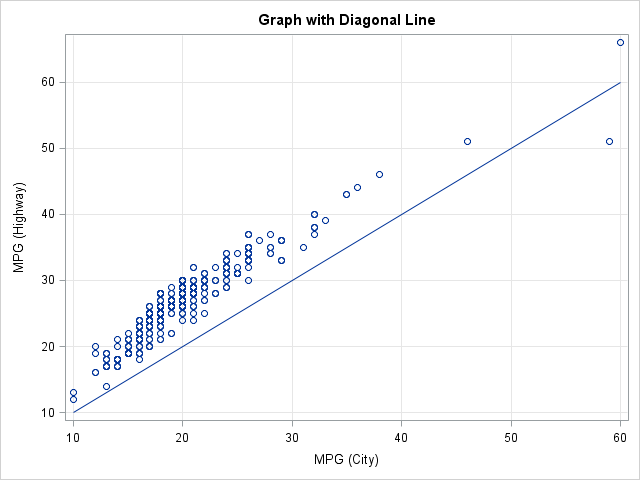 1. Find the min and max of the data

The following SAS/IML statements read the data and compute the minimum and maximum values of the X and Y variables:

2. Store the values in macro variables

4. Write the last point to a data set

Because of the syntax of the VECTOR statement, you need to write the final point of the line segment to a SAS data set. This data set will be concatenated with the original data in the next step of the algorithm. The following statements create the EndLine data set, which consists of two variables (LX and LY) and a single observation:

The original data are in SASHELP.cars. I want to add two new variables, XF and YF, which contain the endpoint of the diagonal line segment. The following data step adds the variables:

The following statements use the SGPLOT procedure to create a scatter plot. A diagonal line is overlaid by using the VECTOR statement.

Other Ways to Overlay Diagonal Lines

If you use the Graph Template Language (GTL), you can use the LINEPARM statement to overlay a line with a specified slope. This is probably an easier technique if you are comfortable with the GTL.

In SAS 9.3, the SGPLOT procedure will support a LINEPARM statement. In addition, SAS 9.3 supports an annotation facility, as described in Dan Heath's SAS Global Forum 2011 paper.

If you want to learn more about the many graphs that you can create by using the SGPLOT procedure, I recommend the SGPLOT Gallery. I also recommend looking at a copy of Sanjay and Dan's forthcoming book, Statistical Graphics Procedures by Example, which will be published in Fall 2011.