I've written about how to add a diagonal line to a scatter plot by using the SGPLOT procedure in SAS 9.2. The main idea (use the VECTOR statement) is easy enough, but writing a program that handles a line with any slope requires some additional effort.

But now SAS 9.3 is here, and adding diagonal lines just got a whole lot easier. Why? Because the SGPLOT procedure in SAS 9.3 supports the LINEPARM statement.

Adding a diagonal line is now trivial with the LINEPARM statement: just specify the equation for the line in "point-slope" form. Use the X= and Y= options to specify a point that the line passes through; use the SLOPE= option to specify the slope. For example, the following statements create a scatter plot of variables in the SASHelp.Cars data set, and overlay the identity line, which has unit slope and passes through the origin: 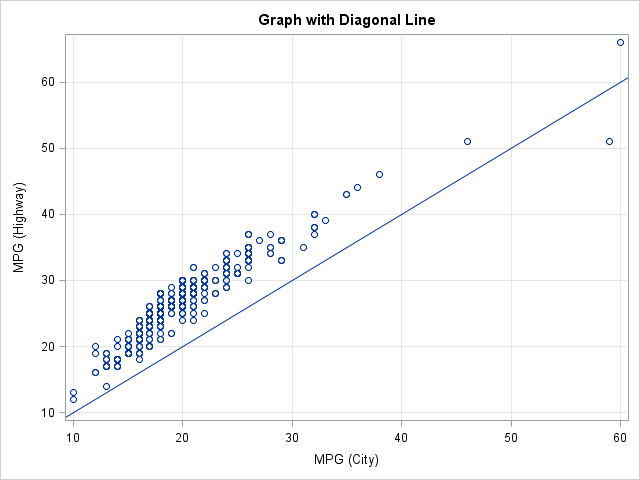 You can overlay multiple lines on a plot by specifying the name of a variable for the X=, Y=, and SLOPE= options. For example, suppose that you want to plot several lines that represent different linear regression models. The following DATA step creates a SAS data set with parameter estimates for three lines: ordinary least squares regression, robust M-estimation, and robust least trimmed squares (LTS) estimation:

The following statements add these variables and observations to the SASHelp.Cars data, and create a plot (click to enlarge) that displays the lines and the data: 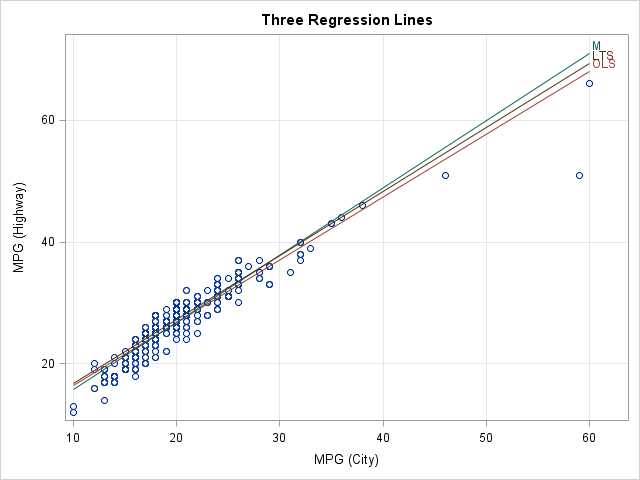 Notice that outliers and high-leverage points "pull down" the OLS line, whereas the robust regression lines are not affected. Also, notice a few techniques used in the PROC SGPLOT call:

Thanks, SAS 9.3. Sometimes a small feature can make a big difference.