Sampling from Normal Distributions in SAS/IML

Each of the p columns of the matrix x is a sample from the same normal population. Today's article describes how to sample each column from a different population. That is, the means and standard deviations are different for each column of x.

As I've discussed previously, when you want correlated vectors you can sample from a multivariate normal distribution by using the RANDNORMAL module. Each of the resulting vectors is univariate normal and they are correlated with each other.

Why Sampling in a Loop Is Better

Some long-time readers might be surprised that I would recommend writing a loop because I have blogged many times about the evils of unnecessary looping in the SAS/IML language, especially for sampling and simulation. But loops are not inherently evil. The point I often make is that loops should be avoided when there is a more efficient vectorized function that does the same thing.

But in the case of sampling from independent normals, a loop is more efficient than calling the RANDNORMAL module. Here's why. The RANDNORMAL algorithm has three steps:

Because the RANDNORMAL algorithm requires sampling, but also involves a Cholesky decomposition (which is an O(p3) operation), I expect it to be less efficient than an operation that uses only sampling.

The following statements use PROC IML to compute p independent normal variates, each with its own mean and variance:

For comparison, the following statements sample from a multivariate normal distribution with uncorrelated components:

You can use the techniques in Chapter 15 of my book, Statistical Programming with SAS/IML Software, to compare the performance of these two methods for a range of values of p. A graph of the results shows that the RANDNORMAL method does indeed require more computational time. Using the module, it takes about one second to create a 300x300 covariance matrix and use it to generate 300 random vectors with 10,000 observations. If you use a loop, sampling from 300 univariate normal distributions takes less than 0.2 seconds.

So go ahead and loop. This time, it's the more efficient choice. 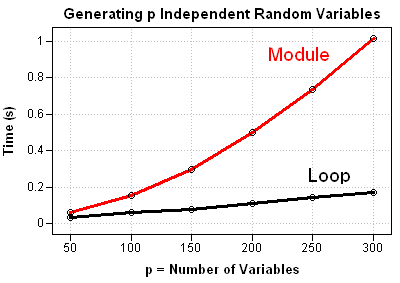