The Flowing Data blog posted some data about how much TV actors get paid per episode. About a dozen folks have created various visualizations of the data (see the comments in the Flowing Data blog), several of them very glitzy and fancy.

One variable in the data is a categorical variable that specifies whether the actor appears in a TV comedy or a drama. It is interesting to compare the salaries for comedies with those for dramas. 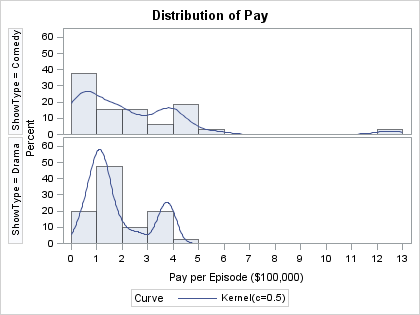 In the example, the bandwidth is chosen by using the Sheather-Jones plug-in method because the default bandwidth selection algorithm seems to oversmooth these data. A smaller bandwidth helps detect the cluster of actors who earn close to $100,000 per episode, and another cluster that earns $400,000 per episode.

This is the beauty of ODS graphics: the procedures automatically create graphs that are appropriate for an analysis.

Oh, and who is the outlier in the comedy group? That's Charlie Sheen. He makes $1.25 million per episode. I think his show, Two and a Half Men, should be renamed Two and a Half Times the Salary, Man!